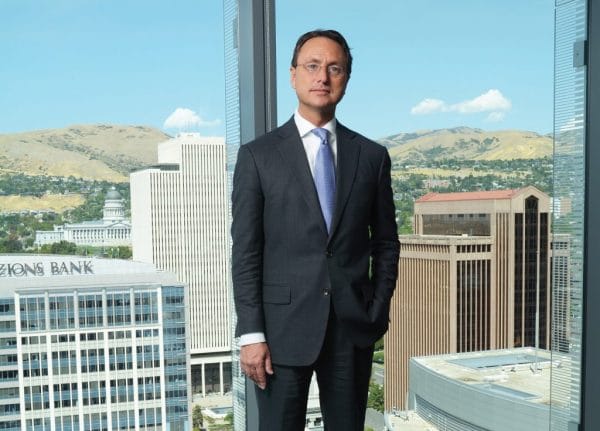 Brandon Fugal is an American entrepreneur, tech investor, and venture capitalist. He is the chairman of the Utah-based real estate company, Colliers International. Brandon also owns the properties located in Utah, Skinwalker Ranch. He is also popular for appearing in the History channel’s reality series, The Secret of Skinwalker Ranch. Brandon Fugal net worth is currently under review. However, we estimate it to be in the range of $300 million to $500 million

Brandon Fugal was born on the 1st of April, 1973 in the United States. He grew up with 3 brothers in a middle-class family. Two of his brothers, Cameron and Matthew have even made appearances on the mystery reality TV series, The Secret of Skinwalker Ranch. They are also in charge of operations of the company, Aero Dynamics Jets.

Brandon has studied at Pleasant Grove High School. He had a dream of making a career as a real estate developer from the beginning. Fugal even obtained a real estate license at the young age of 18.

After receiving his real estate license, he started working in the corporate real estate field. He earlier had worked as a senior associate at the company, Grubb & Ellis/Wallace Associates.

Fugal also earned experience in the real estate world through serving as a Vice President at “Utah Realty Group”. In 1998, he worked on his business idea and co-founded a commercial real estate company, Coldwell Banker Commercial (CBC). In 2018, CBC merged with Colliers International, and Fugal remains as a chairman of the company.

Brandon had made his Salt Lake City-based Coldwell office a No. 1 office among 220 offices in the world. After the merger, he has made Colliers, a No. 1 commercial real estate firm in Intermountain West. To date, he has worked with big clients like Charles Schwab & Co, Inc., Novell Inc., The Northwestern Mutual Life Insurance Company, and Workers Compensation Fund.

In 2016, he bought the 512-acre property, Skinwalker Ranch from a billionaire, Robert Bigelow for $1 billion. He made a secret deal with Robert that no one would know about the new owner. However, Fugal came out as the real owner of the massive property in March 2020, when the reality show was made on the title “The Secret of Skinwalker Ranch”.

On the reality series, the team of experts conducts exhaustive research at the property, Skinwalker Ranch, which is also known for its paranormal activities and UFO sightings. Brandon also had a keen interest in founding tech companies. In fact, he has founded a lot of tech companies, which include Axcend, Zenerchi, and Cypher Corporation.

Brandol Fugal is married to a lady named, Lacey Anne Fugal. He shares four kids with her. The pair celebrated their silver anniversary in 2019. He seems to be living a splendid moment with his wife at present time.

Brandon Fugal has earned a huge fortune in the range of $300 million to $500 million. He has built a number of massive real estate projects. Brandon has accomplished some big projects, which he has put on sales like Embassy Suites/Convention Center worth $100 million, Cottonwood Corporate Center worth $100 million, Banyan Building worth $2.2 million, and Rare Downtown Development Parcels worth $10 million. Some sources claimed that he has made over $6 billion amount from just real estate transactions.

Mason Morfit Net Worth: How Rich is Jordana Brewster’s Fiance?

Andy Jassy Net Worth: How Rich is the Future Amazon CEO Actually?