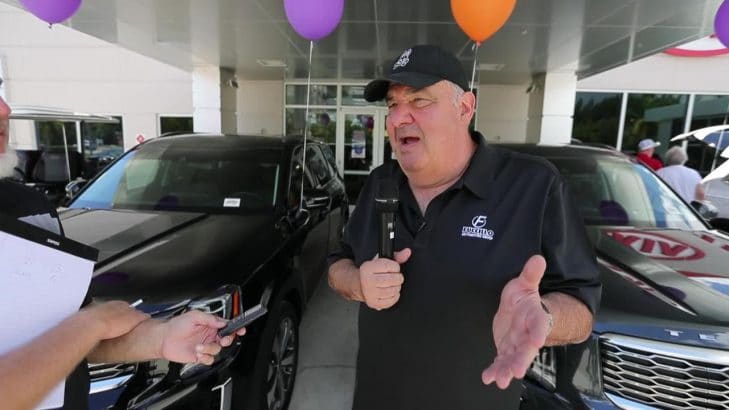 Billy Fuccillo was an American car dealer. He is best known as the owner of Fuccillo Automotive Group. Billy Fuccillo net worth at the time of his death is estimated to be around $100 million.

Billy was born in 1957, in Greenport, Suffolk County, New York. Regarding his education, he went to Syracuse University where he graduated with a degree in marketing in 1978. During his time at the college, he also played football.

After graduating from college, he started to work at various car dealerships. Fuccillo once said “I didn’t have a job, was broke and was going to be evicted from my apartment. The only job I could get was selling cars. I found out I was good at it”.

Billy Fuccillo Net Worth and Career

In 1981, he bought his first wholesale car business and then his store in Adams, south of Watertown, New York, in 1989. He then expanded his business and acquired more and more dealerships.

Billy who is known for his trademark word “HUUUUUUUGGGE” is also known for being a marketing genius. He could spend millions of dollars on ads on billboards, newspapers, buses, airplanes, television commercials, and radio. He once said that his greatest day as a car salesman was selling 514 cars in a single day in 1996.

Billy was a married man. He was married to Cindy Fuccillo and had a son together named Billy Fuccillo Jr. His son is now the president of the Fuccillo Automotive Group.

Billy’s main house was in Skaneateles, New York. He also owned homes in Montego Bay, Jamaica, Mexico, Buffalo, New York, Fort Lauderdale, and many more. According to a Florida news report, he sold his $2.5 million home in Cape Coral, Florida. He had been living in nearby Sarasota, Florida at the time of his death.

On June 18, 2021, Billy died in his Florida home. He had been in declining health for a long period of time following a stroke.

Billy Fuccillo’s personal wealth before his death is estimated to be around $100 million. He earned a vast chunk of that money during his time as the owner of Fuccillo Automotive Group. He also has over 10 personal houses located in several places including New York, Florida, Jamaica, and Mexico.

OMI In A Hellcat Net Worth: How Rich is the YouTuber Actually?