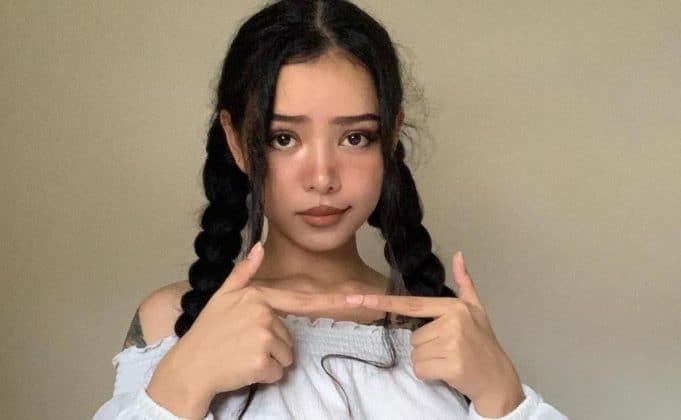 Bella Poarch is a 25-year-old viral TikTok star. After making a lip-sync video to Mille B’s “M to the B,” she became an overnight TikTok sensation. As of 2022, Bella Poarch net worth is estimated to be around $2.5 million.

Bella Poarch was born on February 9, 1997, in the Philippines. She hasn’t said anything about her early life or family. Her real name isn’t Bella Poarch. People started recognizing her as Bella Poarch after she became popular with her TikTok account bellapoarch. Her Facebook details have hinted at Bella’s real name to be Taylor Nariee. .

Bella spent most of her childhood days in the Philippines. She later moved to Hawaii along with her family. A few times back, during a Q&A session in TikTok she mentioned that she grew up with rough childhood. However, she has not shared a detailed story on it.

Bella Poarch Net Worth and Career in Social Media

In April 2020, Bella opened her TikTok account to show her entertaining side. She started with a gaming video on TikTok. After some time, she made a comedy lip-sync and dance videos. However, she was not getting popular with her early videos. It was in August when she became a viral TikTok star. She actually made a lip-sync video on the track “M to the B’.

You May Also Like:   Funny Mike Net Worth: How Rich is the YouTuber Actually?

Soon after some time, the video went viral. In fact, the video received more than 30 million likes. With that, it became the most liked video in TikTok history. The number of followers also started increasing exponentially. To date, she is followed by over 59 million people on TikTok.

Bella is also popular on Instagram, where she frequently posts her new photos and videos. Through her Instagram account, we got to know that she has served in U. S. Navy. However, there is not much to share about her past Navy work experience.

In recent days, she has been very active on Instagram, posting new photos and videos on a regular basis. On March 20, 2021, she posted a video on Instagram requesting people not to hate Asian Americans.  She has 10.2 Instagram followers as of this writing.

Bella has been a part of several controversies as well. Some time back, she was criticized for making a rising sun flag tattoo. The specific tattoo was offensive for South Koreans as it reminds them of the past history with Japan’s Imperial Government.

Soon after the controversial tattoo issue became a hot topic, she made an apology to her fans through Twitter. Poarch said that she was unknown about the history. In October, she shared a picture where she covered the tattoo.

Who is Bella Poarch’s Boyfriend?

Bella Poarch is possibly single right now. A few times back, she was rumored to be dating American rapper, Tyga. The rumors started when they appeared in a TikTok video together. However, Bella has not made any confirmation about being in a relationship with a famous rapper yet.

Bella Poarch is one of the popular TikTok stars of the present time. She has amassed an estimated fortune of $2.5 million by 2022. Bella is currently earning a hefty amount from TikTok and Instagram sponsorship posts.

Nikita Dragun Net Worth: How Rich is the YouTuber Actually in 2022?

TimTheTatman Net Worth: How Rich is the Twitch Streamer Actually?