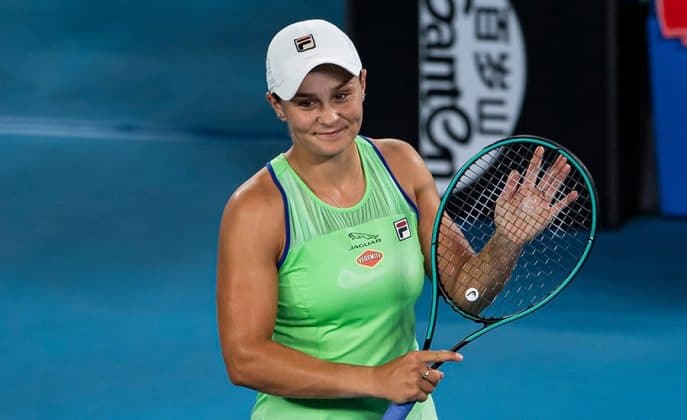 Ashleigh Barty is an Australian professional tennis player. She is currently a World No. 1 Women tennis player. Barty has won 11 singles titles, and 11 double titles on the Women’s Tennis Association (WTA) Tour. She will be competing for the Grand Slam Wimbledon title on July 10, Saturday against Karolina Pliskova. As of 2022, Ashleigh Barty net worth is estimated to be roughly $15 million.

Ashleigh Barty was born on the 24th of April, 1996 in Ipswich, Queensland, Australia. She was born to parents, Robert and Josie Barty. Her father, Robert has served for the State Library of Queensland, and her mother, Josie is a radiographer. She grew up along with two older sisters; Sara and Ali. For her study, she joined Woodcrest State College.

At the young age of 4, she started getting trained at the West Brisbane Tennis Center under the junior coach, Jim Joyce. She had excellent hand-eye coordination from the beginning, which really impressed coach Joyce. She also used to practice at home after coming from school. By reaching 12, she has started playing against the male adults.

Ashleigh started getting trained by Jason Stoltenberg when she turned 15. She has spent most of her junior years out of her home. In fact, she just spent 27 days at home in the entire calendar year when she turned 17. At 15, she won her junior Grand Slam title at Wimbledon. Barty turned professional just after turning 14 in April 2010 at an International Tennis Federation (ITF).

You May Also Like:   Ryan Braun Net Worth: How Rich is the MLB Player Actually in 2022?

In her debut professional match, she faced off against Karolina Wlodarczak, however, she failed to get victory in her first match. She got her first professional win against Ayu Fani Damayanti. Barty finished the 2010-12 season at No. 177 in the WTA singles rankings, and No. 129 in doubles.

Though Barty was struggling to get her first single title, she was going well on doubles. She and Dellacqua both got along and defeated 3 of the top 1 seeds at Wimbledon and the US Open. The duo had their first win at the Birmingham Classic, and later got their second win at the International de Strasbourg in 2014.

Ashleigh took a break from professional tennis after the 2014 US open. During that time, she showed an interest in playing cricket. Barty started training with the coach of the Queensland Fire and began playing for the Western Suburbs District Cricket Club. Barty showed her good form as an all-around player in the second game in Brisbane’s Women’s Premier Cricket Twenty20 league. She made an impressive 63 and took 2 wickets from four overs.

Barty made a comeback to professional tennis in 2016. She was able to win three tournaments out of five in the first two months. Barty got her first career wins at the Australian Open where she reached up to the third round. In 2018, she won the Nottingham Open, which was her second WTA singles title. Then she kept working hard to get into the best form and competed at the US open along with Vandeweghe. She grabbed her first Grand Slam title of her career at the US Open.

You May Also Like:   Karolina Pliskova Net Worth: How Rich is the Czech Tennis player?

Ashley is currently competing at Wimbledon, where she is near to get the title. She has not yet lost a single set since the opening round at the grand slam tournament. Barty reached the final after beating the former champion, Angelique Kerber with a score of 6-3, 7-6. She has to beat Aryna Sabalenka to get the title in her name. She will compete against Karolina Pliskova in the final which will take place on July 10.

Ashleigh Barty is currently dating a PGA trainee professional and a golf player, Garry Kissick. She met him for the first time at the Brookwater Golf Club in 2016. Kissick was working at the golf club when she came to the club to play a round of golf. Soon they get along with each other and started dating.

Garry showed up as Barty’s boyfriend when she brought him to the John Newcombe Awards as her date. Garry has been the biggest supporter and fan of Barty since the day he met with her.

As of 2022, Ashleigh Barty has accumulated a total net worth value of $15 million. She has earned over $18.7 million during her time as a professional tennis player. Till now, she is 23rd on the all-time earnings list. Barty will be taking home the total prize money of $2.4 million if she wins the Wimbledon 2021 on July 10, 2021.

Karolina Pliskova Net Worth: How Rich is the Czech Tennis player?

Jonathan Owens Net Worth: How Rich is Simone Biles’ Boyfriend?