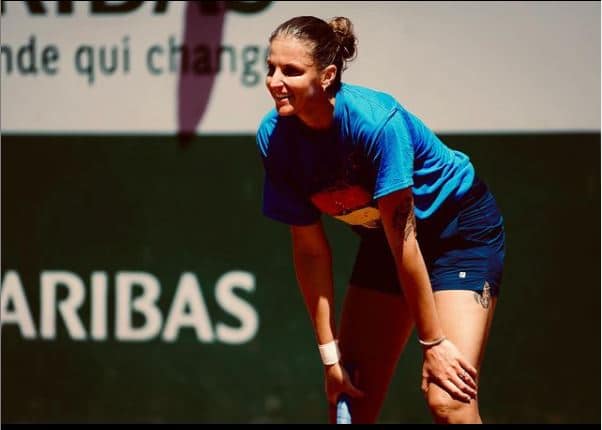 Pliskova has recently made it to the final of the 2021 grand slam Wimbledon, where she will be competing against Ashleigh Barty on July 10, 2021, at all England lawn tennis & Croquet Club.

Karolina Pliskova was born on 21st of March, 1992 in Louny, Czechoslovakia. She was born to parents, Radek and Martina Pliskova. Karolina grew up with an identical twin sister named Kristyna, who is also a tennis player.

Karolina has been showing tremendous form since playing as a junior player. In 2010, she grabbed the junior title of the Australian Open by defeating Laura Robson. She made her senior Grand Slam tournament debut at the 2012 French Open facing off against World No. 8 Marion Bartoli. Karolina continued to show her best form, and she got her first WTA Tour title by winning at the Malaysian Open.

Karolina was in great form in 2015. She started off the year playing at Brisbane International. Pliskova showed her brilliant game in the first round and was able to beat the former World No. 1 player, Victoria Azarenka. She reached the final of WTA Premier-level at the Apia International Sydney, where she faced her fellow Czech player, Petra Kvitova. Even though giving a tough fight to Petra, she eventually lost the game in the end.

Pliskova reached the WTA World No. 1 ranking for the first time on 17 July. She became the 6th player to claim the No. 1 spot without winning a single Grand Slam Tournament. Pliskova is currently on the way to claim her first Grand Slam title as she has reached the final of Wimbledon 2021. She will be competing against the current WTA No. 1 player, Ashleigh Barty on July 10 at all England Club.

Karolina Pliskova is married to her boyfriend named Michal Hrdlicka. She tied the knot with Michal in 2018. She was presented a round diamond cut ring by Michal on their engagement day. Karolina seems to be living a splendid moment with her husband. Her current residence is based in Monte Carlo.

As of 2022, Karolina Pliskova’s personal wealth is estimated to be around $16 million. She was named as the world’s eighth highest-paid female athlete with an earning of $6.3 million. From the WTA Tour, she has earned a total salary earning of $20,958,110. Pliskova will be getting the total prize money of $2.4 million if she wins the Wimbledon 2021.

Matteo Berrettini Net Worth: How Rich is the Italian Tennis Player?

Ashleigh Barty Net Worth: How Rich is the Australian Tennis Player?