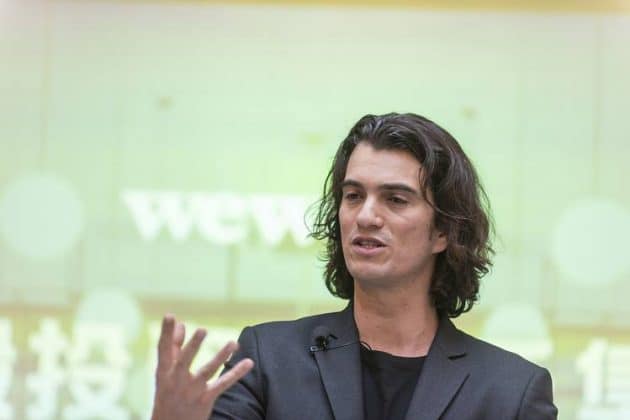 Adam Neumann is an Israeli-American businessman, who lost billionaire status in April 2021. He is the co-founder of the real estate company, WeWork. Adam resigned as CEO of WeWork on September 26, 2019. As of 2022, Adam Neumann net worth falls in the range of $1,5 billion.

Adam Neumann landed on this world on April 25, 1979, in Tel Aviv, Israel. He was born in the house of Avivit and Doron Neumann. His parents were from Israel. At 7 years of age, his parents separated by divorce. He was raised by his mom. Adam has a younger sister named Adi.

Along with his mom and sister, he shifted to the United States. As a kid, he suffered from severe dyslexia.  He couldn’t pronounce and write words properly until he was studying 3rd grade. In 1990, he moved back to Israel and stayed in Kibbutz Nir am, where he studied at the Israeli Naval Academy.

He joined Israeli Nay and worked as an officer for five years. Adam later relocated to the United States and studied at Baruch College based in New York City.

Talking about his career journey, he earlier founded the children’s clothing company Krawlers. After some years, he met Miguel McKelvey through a mutual friend. Both had a similar interest in community upbringings, which led them to open a shared business workspace called Green Desk. In 2010, they came up with a new business idea and founded WeWork.

You May Also Like:   Melinda Gates Net Worth: How Rich is Bill Gates Ex-Wife Actually?

Adam went through several controversies during the time he worked in WeWork. In 2018, he and McKelvey were found smoking marijuana while traveling to Israel from the U. S. The flight crew caught them red handed when they found cereal boxes full of marijuana. Adam and McKelvey were sent back to U. S. on a separate flight by the jet owner in fear that they could fall into a marijuana trafficking incident.

Likewise, in 2018, WeWork faced a lawsuit after a former employee alleged the company of sexual harassment and inappropriate behavior. She further alleged to Adam that he forced her to have tequila shots while she was giving an interview.

Soon after the inappropriate news of Adam broke out in the media, the directors asked him to resigned his post on September 22, 2019. He resigned as CEO of WeWork on September 24, 2019. The Wall Street Journal claimed that he would be getting an amount of $1.7 billion from the stakeholder of SoftBank for stepping down as board member of WeWork.

However, soon after a week, along with other official board members, Adam faced a lawsuit by the minority shareholders. According to Forbes, his net worth dropped to $750 million on March 5, 2021.

Adam has also invested in other companies besides WeWork. In 2020, he invested $10 million in shared mobility company, GOTO Global. Likewise, he has invested in a start-up company EquityBee and a hospitality company, Selina.

Adam Neumann is a married man, who hitched with the heiress and businesswoman Rebekah Neumann. He is a father to five kids from being in a conjugal relationship with his wife, Rebekah.

You May Also Like:   Alli Webb Net Worth: How Rich is the Founder of Drybar Actually?

According to Forbes, Adam Newmann net worth has fallen down to $1,5 billion, after SoftBank Group Corporation bought $3 billion shares of WeWork. If the reports are to be believed, he lost $13.5 billion amount from his personal fortune.

Marc Lore Net Worth: How Rich is the Entrepreneur Actually?