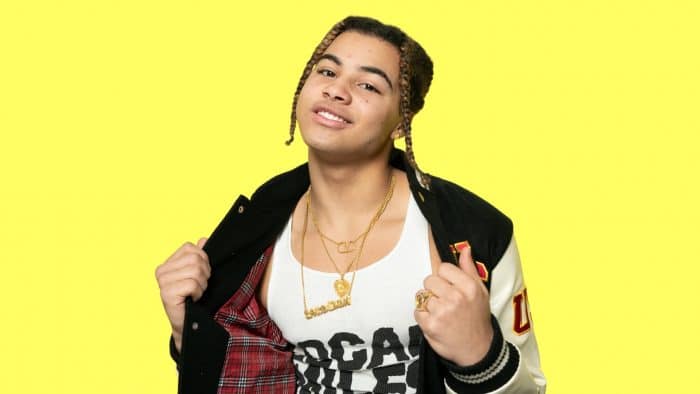 Golden Landis Von Jones, better known by his stage name 24kGoldn is a famous American singer, rapper, and songwriter. He is best known for his 2019 single “Valentino”. As of 2022, 24kGoldn net worth is estimated to be around $600 thousand.

24kGoldn was born as Golden Landis Von Jones on November 13, 2000, in San Francisco, California, United States. Goldn’s father is an African-American and his mother is Ashkenazi Jewish. Goldn’s parents were fashion models. He has a sibling, named Sage.

24kGoldn studied at Lowell High School, holding graduation in 2018. He was interested in acting and music from an early age. Golden has even appeared in few commercials as a child actor. While studying in school, he used to sing choir. As he grew matured, he became more interested in music.

Though Golden was sure that he could develop his career in music, he decided to be a hedge fund manager. He got enrolled at Marshall School of Business at the University of Southern California. However, Golden’s interest in music didn’t let him focus on his study. Considering that he decided to take a leave of absence to focus on music.

24kGoldn Net Worth and Rise to Fame

It was in the year 2017, Golden released his first music video titled “Trappers Anthem”. After taking few first steps in music, he went on climbing further steps that would eventually take his ultimate goal of becoming a successful rapper. His 2019 released single titled “Valentino” earned him wide recognition. The single was a big hit that received more than 100 million plays on the popular audio streaming service provider, Spotify.

You May Also Like:   Unghetto Mathieu Net Worth: Height, Age, Real Name & Career

With the success of Valentino, he started getting recognized all over the place. In November 2019, he released his debut EP titled “Dropped Outta College”. After that, he even signed a record deal with Columbia Records and Records LLC.

He further continued his success journey with the 2020 released single “City of Angels”. The single was officially released on March 31, 2020. After few months, his new single “Mood” was released featuring Iann Dior. The song was a big hit as well which peaked at Number 1 spot on Billboard Hot 100.

Golden’s most recent single titled “3, 2, 1” was released on Feb 19, 2021. The official video of the song was released on his YouTube Channel 24kGoldn. The video is viewed by more than 425K people in just 24 hours.

A young rapper, 24kGoldn is currently single. On Nov 28, 2020, Golden answered some interesting questions related to his personal life on Hollywire. He revealed that he has a crush on Billie Eilish. In the same chitchat section, Golden stated that the most romantic thing he has done to date was in 8th Grade where he gifted his crush a favorite candy.

At such a young age, 24kGoldn has received wide popularity and fame. He will certainly be a superstar of music and more popular than he is today. Through his musical career, 24kGoldn has accumulated a total net worth amount of around $600 thousand.

Lil Fizz Net Worth: How Rich is the Rapper Actually in 2022?

BabyFace Ray Net Worth: How Rich is the Rapper Actually in 2022?