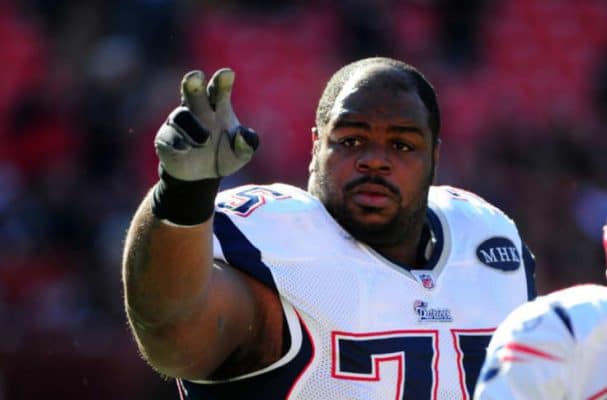 Vincent Wilfork is a former American football player. He is best known for playing in the National Football League (NFL) for 13 seasons. Vince was drafted by the New England Patriots in the 2004 NFL Draft. As of 2022, Vince Wilfork net worth is estimated to be around $25 million.

Vince Wilfork was born on 4th November 1981 in Boynton Beach, Florida, United States of America. He lost both of his parents in 2002. Regarding his education, he has studied at Santaluces Community High School. He used to actively play football while studying there. In fact, he was excellent in football, track, and field, and wrestling. He received USA Today’s 2nd team All-American honors.

Vince continued to play for the Miami Hurricanes football team while studying at the University of Miami. At the same time, he was also competing for the Miami Hurricanes track and field team. In the freshmen season, he played as a defensive tackle in all games. He was rated as the second-best defensive tackle in U. S. before the season, which was given by The Sporting News. Vince finished the season with 64 tackles, which helped his team to get ahead in 20 quarterback hurries.

Wilfork was chosen in the first round of the 2004 NFL Draft by the New England Patriots. In the 2004 season, he completed 42 tackles, 3 deflected passes, and 2 sacks. During the rookie season, he started playing at Super Bowl XXXIX, where his team played against the Philadelphia Eagles. In 2005, he had a career-high 54 tackles in 16 games. Despite his good performance, his team was eliminated in the second round, where they competed against the Denver Broncos. He continued to play the good game in the 2007 season, where he had 48 tackles and 2 sacks.

You May Also Like:   Stefon Diggs Net Worth: How Rich is Buffalo Bills Wide Receiver?

Vince was selected to the 2008 Pro Bowl and was named as second-team All-Pro selection. He ended the 2008 season with a career-high 66 tackles. Vince entered the final season of his contract with the Patriots in 2009, and his contracts expired after the 2009 season. Vince was re-signed by the Patriots on March 5, 2009. He moved to the defensive end in the Week 4 game against the Miami Dolphins in the 2010 season. However, he came back at nose tackle with the week 8 win over the team Minnesota Vikings.

In the 2011 NFL Season, he started playing as a defensive tackle. He recorded his new career-high 3.5 sacks during the season, and thus, he was included on AFC’s 2012 Pro Bowl roster. Vince was re-signed by the Patriots in March 2014. During the 2014 season, he recorded 47 tackles and 2 passes. His effort also helped Patriots to reach Super Bowl XLIX. Vince became a free agent on March 5, 2015, at the end of the 2014 league season.

Vince signed a 2-year contract deal with Houston Texas on March 16, 2015. He had a total of 43 tackles with Houston in 2015, which helped his team to get back-to-back victory on AFC South titles. He was named an honorary captain by the Patriots for the AFC Championship game during the 2018 season. Vince also handed over the Lamar Hunt Trophy after the Patriots get victory over Kansas City Chiefs. He announced his retirement on August 9, 2017, by signing a one-day contract with the Patriots.

Vince Wilfork is married to a lady named, Bianca. He shares two sons, and a daughter with her. One of his sons, D’Aundre Holmes-Wilfork was arrested on May 22. He was charged with the theft of Vince’s property worth more than $300,000 which includes his two Super Bowl rings, a college football championship ring, two AFC championship rings, and multiple necklaces, earrings, and bracelets.

Vince reported a missing case of his jewelry on May 10. He found that his son, D’Aundre has stolen all his things, when one of the Patriots fans found his Championship rings online in a memorabilia group. Later he came to know that the person who posted about the rings had purchased them from D’Aundre for $62,000. Later, his son was arrested, and Vince got back his rings.

Vince Wilfork has amassed a whopping net worth amount of $25 million by 2022. As per sources, he was getting an annual salary of $19 million from the Patriots. Vince was fined four times in the 2007 season by the NFL. Vince received $40 million after he was re-signed by the Patriots.

Hayden Buckley Net Worth: How Rich is the Golfer Actually in 2022?

Stevie Williams Net Worth: How Rich is the Skateboarder Actually?