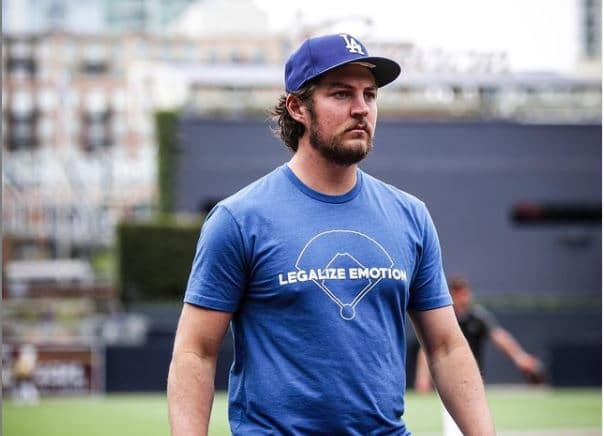 Trevor Bauer is a 31 years old American professional baseball pitcher. He is best known for playing in the Major League Baseball (MLB) for the Los Angeles Dodgers. Bauer received the Cy Young Award in 2020, and he is the NL ERA leader. As of 2022, Trevor Bauer net worth is estimated to be roughly $50 million.

Bauer was placed on administrative leave by MLB after a woman named Lindsey Hill accused him of sexual assault allegations. The court has recently dissolved the restraining order against him, and with that, he has won the hearing.

Trevor Bauer was born on the 17th of January, 1991 in North Hollywood, California. He was born to his parents, Warren and Kathy. His parents hired a private coach to teach him pitching lessons. Trevor used to practice pitching on the local tennis court against the fence. He was literally obsessed with baseball, and for that, he was bullied by his friends in school.

For his study, he joined William S. Hart High School. He was actively playing baseball while studying in high school. As a junior player, he posted a 12-0 win-loss record where he scored 0.79 ERA. After high school graduation, he joined the University of California, Los Angeles (UCLA). During that time, he was playing for the UCLA Bruins baseball team.

Bauer has set many records for UCLA. He became the first player from UCLA to earn the Golden Spikes Award. Trevor was selected in the 2011 MLB Draft by the Arizona Diamondbacks. He was initially assigned to the Class A-Advanced Visalia Rawhide, where he made just 3 appearances. Bauer was called up by the Diamondbacks on June 27, 2012, on a replacement of their injured player, Joe Saunders.

Trevor got his first victory with Diamondbacks on July 8 by defeating the Los Angeles Dodgers with a score of 7-1. He was traded to the new team, the Cleveland Indians on December 11, 2012. In 2014, he had 26 major league starts, where he scored 4.18 ERA, and strike out 143 batters in total 153 innings. Bauer was traded to Cincinnati Reds on July 31, 2019. He posted a career-best year in the shortened 60-game season for the Reds, where he scored 1.73 ERA in 11 starts.

On November 4, 2020, he rejected the Red’s qualifying offer and decided to become a free agent. He was signed with the Los Angeles Dodgers on February 5, 2021. Bauer was placed on administrative leave by the MLB on July 2, 2021, after the sexual assault allegations were made against him. Before he was placed on leave, he scored 2.59 ERA in total 17 stars and had an 8-5 record.

You May Also Like:   Danny McCray Net Worth: How Rich is the NFL Player Actually?

Trevor Bauer is still living a single life. He recently fell into a controversy after a San Diego-based woman, Lindsey Hill accused him of physical and sexual assault. On June 28, the lady was granted a temporary domestic violence restraining order. After that, Trevor had to go under a civil hearing for the claimed restraining order from August 16 to August 19.

The temporary restraining order was removed by the Los Angeles County Superior Court Judge, Dianna Gould-Saltman on August 20, 2021. The Superior court Judge claimed that the lady is no longer in danger, and Bauer also has a low chance of reoffending. Despite the court removed the restraining order, his leave was extended by MLB, and further investigation is conducted by the Pasadena Police Department.

As of 2022, Trevor Bauer’s personal wealth is estimated dto be around $50 million. He signed a three-year contract deal worth $102 million with the Los Angeles Dodgers on 11th February 2021. Besides his involvement in sports, he has also co-founded the sports media company, Momentum in 2019.

Gervonta Davis Net Worth: How Rich is Tank Davis Actually?

Nick Young Net Worth: How Rich is the Former NBA Player Actually?