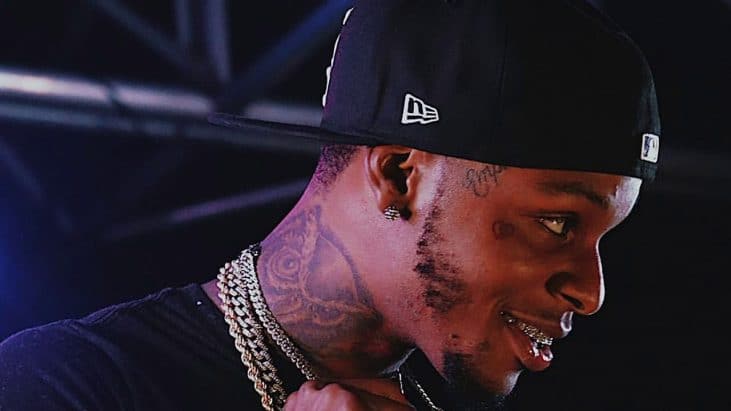 Toosii is a young rising American rapper, best recognized for his songs “Red Lights”, “Lost” and “Dreams”. He rose to fame after releasing songs on SoundCloud and Spinrilla. Toosii is currently signed under South Coast Music Group. As of 2022, Toosii net worth is reported to be around $1 million.

Toosii was born on January 9, 2000, in Syracuse, New York, United States. He was inspired to take footstep in music by his father and brother. Earlier, he was more into sports, especially football. He used to play football as slotback and quarterback. Toosii has studied at Rolesville High School. While playing in the school team, he used to wear a No. 3 jerseys. As he reached 13 years of age, he started taking interest in rapping.

Toosii Net Worth & Career in Music

Toosii puts his first step into the studio at just 16 years of age. He was there to sign his first-ever music deal. Toosii got his name from his mother, who used to call him Toota Butt. After his friends got to know about the name, they started mocking him with the name Tootsie. Later, he used it for a stage name as King Toosii.

You May Also Like:   BRS Kash Net Worth: Height, Age, Net Worth, Real Name & Career

He came up with his first EP titled “Blessings”, which was released in November 2016. The EP was released on Spinrilla. Following that, he released three projects in 2017 titled “Label Me Diverse”, “Why Not Now” and “Hell on Earth”. He was able to gain some recognition with his early music projects. In 2018, he dropped few songs like “Karma”, “Wicked Feelings” and “Right Track”.

Toosii dropped the 10 track project titled “Who Dat” in April 2019. The project has hit songs like “Turmoil” and “Opp”. However, he claimed fame after the song titled “Red Lights” was released in October 2019. The song was a big hit, which received over 2.6 million streams on SoundCloud.

Toosii continues to give hit songs in 2020. He released his album titled “My Sh!t Show” on January 3, 2020. Toosii came up with the new studio album “Platinum Heart” on February 7, 2020. The album was released by the music label South Coast Music Group.

He released a deluxe edition of Platinum Heart on May 29, 2020, which includes popular songs like 5 Stars and Inside Out. He has given few hit songs recently. Toosii released a remix version song “Back In Blood” on March 16, 2021. His recent song titled “Back Together” was released on April 2, 2021. The official video of the song received 1.6 million YouTube views in a week.

The 22-year-old rapper currently stands at 5 feet 7 inches or 170 cm tall and weighs approximately 70 kg or 154 pounds. His chest size, arms size, and waist size are not available at the moment. Likewise, his hair color and eye color are both black.

Toosii has not revealed any information regarding his love life yet. He is believed to be living a single life. Toosii seems to be more focused on his career right now. He is gathering a mass number of fan following on social media. To date, he is followed by 2.9 million followers on Instagram.

Toosii has accumulated an approximate wealth of $1 million by 2022. He has earned all the amount from his music career. He is yet to get more fame in his career. As he gives more hit songs, his net worth will surely increase in the future.

Kingg Bucc Net Worth: How Rich is the Rapper from Miami Actually?