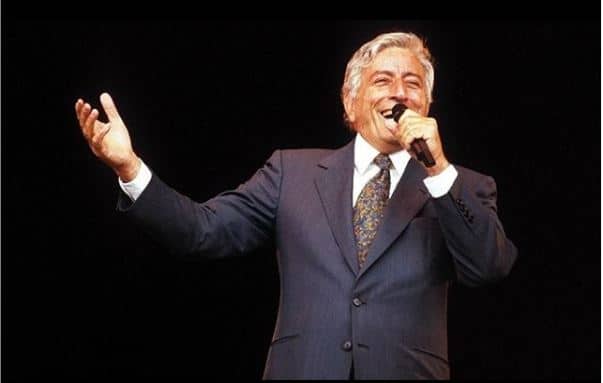 Anthony Dominick Benedetto, better known as Tony Bennett is a 95 years old American singer. He is best recognized for his renditions of jazz, and show tunes. Tony is also known for his popular songs “Rags to Riches”, and “I Left My Heart In San Francisco”. As of 2022, Tony Benett net worth is estimated to be around $220 million.

Tony Bennett took retirement from performing at the stage just a few days after his 95th birthday. His son and manager, Danny Bennett confirmed that his two recent dates with Lady Gaga at the New York’s Radio City Music Hall would be his last concert performance.

Tony Bennett was born on the 3rd of August, 1926 in Long Island City, Queens, United States. He was born to his parents, John and Anna Benedetto. His father was a grocer, and his mother was a seamstress. He has an elder brother, John Jr., and an elder sister, Mary. Tony has grown up in poverty since his father was in poor health and unable to work.

Bennett became interested in jazz music after listening to the jazz artists Louis Armstrong, Joe Venuti, and Jack Teagarden. He also got into show business because of his uncle, who used to perform as a tap dancer in vaudeville. At 10 years of age, he started singing and performing at the opening show of the Triborough Bridge.

Tony started working as a singing waiter when he was 13. He had performed in many Italian restaurants for money. For his study, he joined New York’s School of Industrial Art. He was studying painting and music in school, however, he dropped out from school at 16 years of age to provide financial support to his family. Then, he worked in several low-skilled and low-paying jobs like copy boy, and runner for the Associated Press.

You May Also Like:   Giveon Net Worth: How Rich is the Singer Actually in 2022?

Bennett was signed by Columbia Records in 1950 after he cut a demo of the 1933 hit song “Boulevard of Broken Dreams”. At that time, he used to sing copying a legendary singer, Frank Sinatra. The record producer, Mitch Miller told him to stop imitating Sinatra, and come up with his own singing style. He gave his first big hit through a song titled “Because of You”.

Bennett then gave back-to-back hit songs like “Blue Velvet”, “Rags to Riches”, and “Stranger in Paradise”. He soon established himself as an international artist. Tony released his first long-playing album titled “Cloud 7” in 1955. Then in 1963, he released came up with the album “I Wanna Be Around…”, which became a big hit.

At the end of the 1970s, Bennett had developed a drug addiction that hugely affected his music career. In 1979, he had a near-fatal cocaine overdose. After that, he called his two sons, Danny and Dae, who were working on their music careers. Though, they didn’t have the musical skills as their dad. Danny took care of his dad and controlled his expenses.

In 1986, Bennett was re-signed to Columbia Records and along with the record label, he released an album “The Art of Excellence”. Tony wanted young generations to listen to his songs as well, so, he started playing a series of benefit concerts around the United States by the alternative rock radio stations. In 1994, he appeared on MTV Unplugged through which he gathered some new audiences.

Bennett released an album titled “Duets: An American Classic” in 2006. He just turned 80 at the time of the release of the album. He received two Grammy Awards for the album. Bennett came up with an album containing songs composed by Jerome Kern on 25th September 2015.

You May Also Like:   Kristen Bell Net Worth, Age, Bio, Height, and Tattoos

He re-recorded the song titled “Fascinating Rhythm” in September 2018 which earned him the title of longest time between the release of the original recording and re-recording of the same single by the same artist.

Tony Bennett has been married three times. He was first married to Patricia Beech in 1952. His first marriage lasted for 19 years, and in 1971, he tied the knot with Sandra Grant. In 2007, he ended his second marriage with divorce, and the same year, he married his third wife, Susan Crow. Susan is 40 years younger than him.

Tony was diagnosed with Alzheimer’s disease in 2016. However, he was still performing even in bad health conditions. Alzheimer’s disease has a minor effect on Tony as he had started having short-term memory loss. He would forget that he had just finished performing at a concert, though he would remember all the lyrics while performing on stage.

As of 2022, Tony Bennett’s personal wealth is estimated to be around $220 million. He has been able to gather a gigantic amount through his over 50 years of involvement in the music career. In his longtime musical career, he has sold more than 50 million records worldwide.

Ashanti Net Worth: How Rich is the Singer Actually in 2022?