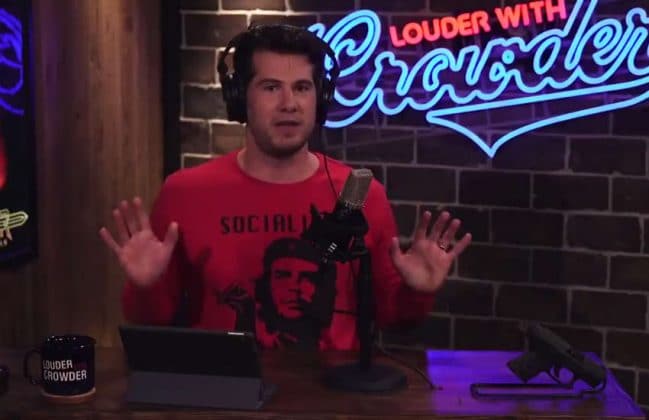 Steven Crowder is a well-known American-Canadian conservative political commentator and TV show host. He is best recognized as a host of the popular TV show, Louder with Crowder. As of 2022, Steven Crowder net worth is estimated to be around $3 million.

Steven Crowder was born on July 7, 1987, in Detroit, Michigan, United States. He was born to Darris S. Crowder and Francine Crowder. His mother, Francine was a French Canadian who has worked as a costume designer and stylist in Canadian TV shows. Steven has an elder brother named Jordan Crowder, who is working in the entertainment business as an actor.

Steven spent his childhood days growing up in Greenfield Park, Quebec, Canada. He completed his high school education at Centennial Regional High School. He returned back to U. S. at 18 years of age and joined Champlain College. Though, he just studied there for two semesters.

Crowder has earlier worked as a voice actor on the children’s TV series “Arthur”. He gave a voice for the character of Alan “The Brain” Powers”. Steven also showed his humorous side performing as a stand-up comedian. In 2009, he tried his luck as an actor appearing in many movies. His most noticeable work as an actor came in the movie “To Save a Life’.

You May Also Like:   Jim Bakker Net Worth: How Rich Is the Televangelist in 2022?

At the young age of 21, he started working for Fox News. He served at the news channel for three years. In 2013, he lost the contract with Fox after he was found criticizing Fox News Channel and host Sean Hannity on some radio show.

Crowder became a known figure after he started hosting the show called “Louder with Crowder”. He mainly grabs the attention for his Change My Mind Segment in the show.

In 2018, he shared a picture on Twitter where he seated behind a sign “Male Privilege is a Myth/Change My Mind”. Soon after the tweet, people started mocking and parodying him with changing the signs for different situations.

In 2019, he uploaded multiple videos targeting the host Carlos Maza. The host of the Vox series Strikethrough found the videos unpleasant and dehumanizing as Steven referred to him as Mr. Lispy queer, angry little queer, and gay Mexican. Later, Maza’s complaints on Crower’s insulting behavior went viral on Twitter.

The issue finally reached YouTube, who didn’t find Steven’s statements violated any of their policies. But, after 12 hours YouTube officials came in favor of Maza and made a decision to demonetize Crowder’s YouTube Channel. However, they re-monetized some of his content after Steven addressed his content and behavior.

Steven Crowder is a married man. He tied the knot with Hillary Korzon in August 2012. Steven was dating her for a long time. The couple made their relationship official with engagement in March 2012. In 2020, Hillary was about to give birth to their first kid. But, she suffered from a miscarriage.

Steven Crowder has amassed a huge fortune of $3 million by 2022. He has earned the big sum from being associated as a host of the TV show Louder with Crowder. Besides that, he was also earning a hefty amount from his YouTube channel before it was banned. Sources revealed that his channel was generating monthly revenue of $80,000.

Kenny Mayne Net Worth: How Rich is the Sportscaster Actually?