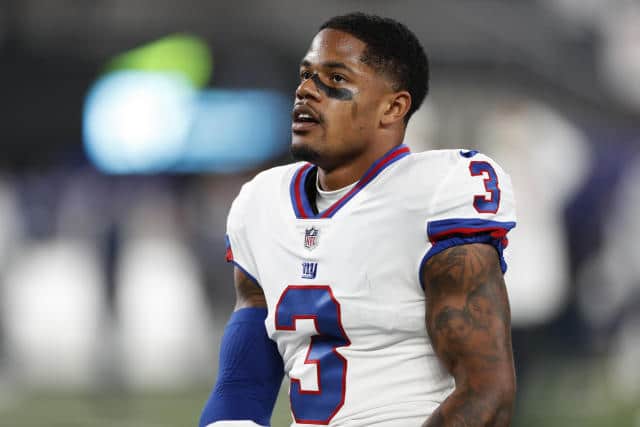 He was a consensus four-star recruit who committed to the University of Oklahoma to play college football. Sterling’s  2021 season ended early after he tore his left Achilles tendon in December while playing against the Dallas Cowboys. He sustained another significant injury against the Cowboys again on Monday, September 26, which made him out for the season.

Sterling Shepard was born on February 10, 1993, in Oklahoma City. He was born to Derrick Shepard who played as a wide receiver in the NFL from 1987 to 1991. His father died when he was 6.

Regarding his education, he joined the Heritage Hall School, where he rushed for 1115 yards and recorded 38 touchdowns. He got selected for the Under Armour All-American Game after his senior season. Then, he competed in basketball and track.

Sterling Shepard had 233 receptions for 3482 yards and 26 touchdowns in his collegiate career. He began his professional career after he was selected in the 2016 NFL Draft by the New York Giants. Shepard signed a four-year, $5.94 million contract with the Giants on May 6, 2015. He was named a starting wide receiver in the 2016 season. Shepard began the 2017 season off with 9 receptions for 67 receiving yards. However, he missed multiple games regarding his issues with migraines.

Subsequently, he tore his left ACL during the 16-23 loss game against the Dallas Cowboys in Week 3. During the final Giants snap of the game, he pulled up on a route and accidentally clutched his left knee. After falling to the ground, he was in obvious pain and had to immediately leave the field on a cart. On Tuesday, the head coach, Brian Daboll told that Sterling tore his ACL and said that he would stay out for the season.

Sterling Shepard was married to model, Chanel Iman. He exchanged wedding vows with Iman on March 3, 2018. Together, they had their first baby, Cali Clay on August 10, 2018. Then, the pair welcomed their second daughter, Cassie Snow on December 17, 2019. Shepard filed for divorce from his wife, Iman on June 7, 2021, citing irreconcilable differences. He requested the legal custody of their two kids, Cali and Cassie.

Shepard also requested that his daughters stay with him in his primary residence, where Iman would only supervise parenting time. His estranged wife went Instagram official with her new beau, Davon Godchaux in April. Iman recently got in a public feud with Sterling’s mom, Cheri over the matter that Iman letting her two girls spend time with Godchaux’s son. Cheri told that Iman is still married, and get divorced!, when one of the Instagram followers commented Blended (family) I Love It.

Zack Martin Net Worth: How Rich is Cowboys’ Offensive Guard?