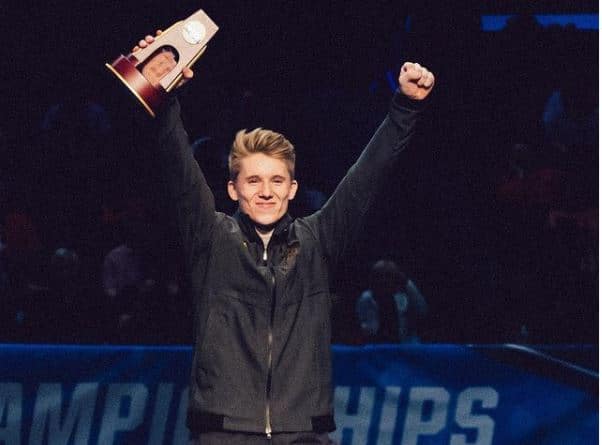 Shane Wiskus is a 23 years old American artistic gymnast. He is a 3 time NCAA Champion and has represented the United States at the 2019 World Championships. Shane was included as one of the members of the U. S. men’s gymnastic team on June 26, 2021, for the Tokyo Olympics. Shan Wiskus net worth is still unknown and under review at the moment.

Shane Wiskus was born on 1st October 1998 in Waconia, Minnesota. He was born to parents, Mike and Tammy Wiskus. He seems to be sharing a strong bond with his parents. On May 10, 2021, he shared his childhood photo with his mother, Tammy, on Instagram wishing her a Happy Mothers Day. He also has three siblings named Annabelle, Dani, Andrew on his family.

At the early age of 4, he started gymnastics. He attended the University of Minnesota Athletics, where he represents the college sports team, Minnesota Golden Gophers.

Shane first competed at the 2014 National Championships. There, he finished at 11th place in the all-around, and 4th on-floor exercise. Then, he went on competing at the 2015 National Championships. This time, he was able to finish at second place in the all-around. Later, he was selected to present his country at the Olympic Hopes Cup. He didn’t disappoint in the competition and helped the USA finish in 3rd place.

You May Also Like:   Clinton Portis Net Worth: How Rich is the former NFL Player Actually?

Wiskus grabbed his first victory at the 2016 National Championships. The victory helped him earn his first-ever national all-around title. Shane started competing as a senior gymnast in 2017, where he competed at the 2017 Winter Cup. There, he finished at 11th Place in the all-around. Shane later helped the USA finished second at the University of Calgary International Cup.

Shane continued to compete with his college team, Minnesota Golden Gophers. In fact, he helped his team finish at second place while competing at the 2018 NCAA National Championships. He was also in best form individually, where he earned a silver medal in the all-around.

Shane was selected to compete at the Tokyo Olympic Trials in 2021. He recently made it to the 2021 Olympic team at the Olympic trials held in St. Louis, Missouri. He finished a critic routine at the Olympic gymnastics trials, which got him to place secured at the upcoming Tokyo Olympics.

Shane Wiskus currently stands at a height of 5 feet 7 inches or 170 cm tall and weighs around 65 kg or 143 pounds. His body stats like chest size, waist size, and arms size are not available at the moment. Likewise, his hair color and eye color are both light brown.

You May Also Like:   Ron Duguay Net Worth: How Rich is Ron Duguay Actually?

Shane Wiskus is currently dating a lady named Lucci. He is often seen sharing pictures with her on Instagram. He seems to be dating her since 2018.

On February 2, 2019, he shared a picture with her with the caption “1 year, don’t know where I would be without you. Here’s to another.”. His lady love, Lucci, completed her University graduation in May 2020. Shane clicked a picture with Lucci on her graduation day and shared it on his Instagram on May 22, 2020.

Wiskus must have earned the satisfying amount from his gymnastics career. On average, a gymnast would get an annual salary of around $51,000. Shane is continuing his gymnast career since 2014. That makes us assume that he might have gathered a whopping net worth figure.

Harris English Net Worth: How Rich is the Golfer Actually in 2022?