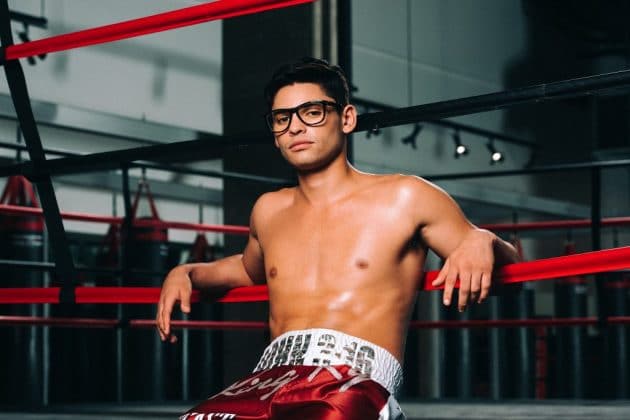 Ryan Garcia is a professional boxer from America, who is reigning the WBC Interim Lightweight title since January 2021. Ryan has been unbeaten since 2016. He is ranked at 3rd best active lightweight boxer by The Ring Magazine. As of 2022, Ryan Garcia net worth is estimated to be around $12 million.

Ryan Garcia was born on August 8, 1998, in Victorville, California, U. S. He was born to parents, Henry and Lisa Garcia. His uncle Sergio Garcia is also a boxer. Ryan’s dad Henry wanted to compete in the boxing ring as a professional boxer, but unlike his uncle Sergio, he ended up as a boxing coach. Ryan’s mom Lisa is handling commercial projects as his personal administrative assistant.

Ryan grew up with four siblings; three younger sisters and one younger brother. At the early age of 7, he started practicing boxing along with his brother Sean and best friend Lawrence The Dawg King. Ryan had a successful amateur boxing career, where he became a national amateur champion for the 15th time. As an amateur boxer, he had an amazing record of 215-15.

Ryan Garcia Net Worth and Career in Boxing

Ryan started his professional boxing career on June 9, 2016. He won his first match against Edgar Meza. In November 2016, Golden Boy Promotions signed a contract with Ryan. He played his first lightweight match on December 17, 2016, where he became victorious in the second round by knockout.

As he was in no mood to spare his opponent, Golden Boy Promotions didn’t want to lose a strong player like him. That’s why his contract was extended for five years in September 2019. Ryan continued his excellent form while competing with his next opponent Romero Duno. He knocked out Duno in the first round and captured the “WBC Silver Lightweight” title.

Ryan’s next opponent was Francisco Fonseca with whom he fought on February 14, 2020. He was in superb form in the match. Like in his early games, he finished the boxing match in the first round with a knockout.

On January 2, 2021, Ryan faced Olympic gold medalist, Luke Campbell. He was playing for the Interim WBC Lightweight title. The match went on for the seventh round, and in the end, Ryan came out as a winner holding the WBC Lightweight Title.

In October 2020 Ryan was captured kissing social media star Malu Trevejo outside N10 Restaurant in Los Angeles. After the incident, his girlfriend Drea made her Instagram private as Ryan told her that he is training hard for his next fight.

At the start of 2022, Ryan Garcia’s personal wealth is estimated to be around $12 million. He has earned all the money from his boxing career. Since he is just 23, the amount is going to increase for sure in the next few years.

Cameron Davis Net Worth: How Rich is the Australian Golfer Actually?

David Pollack Net Worth: How Rich is the former NFL Player Actually?