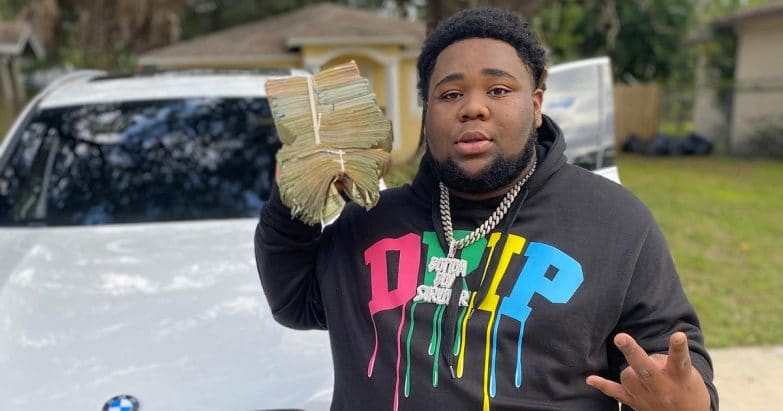 Rod Wave is 21 years old American rapper. He claimed to prominence after the release of the 2019 song “Heart On Ice”. Rod also became popular with hit singles “Heart Break Hotel”, “Bag” and “Tomorrow”. As of 2022, Rod Wave net worth is estimated to be around $3 million.

Rod Wave was born Rodarious Marcell Green on August 27, 1999, in St. Petersburg, Florida, United States. He was raised by his mother. While studying in elementary school, his parents separated. Even after separation, his father looked after him. Rod’s dad is a street hustler, who got locked up in prison before Rod joined the middle school.

Rod had a weak financial status in his early days. He even involved in criminal activities like stealing cars, selling drugs, and robbing houses. He has been arrested multiple times for getting indulge in armed robbery and carrying a concealed weapons.

Wave turned his career path and got out of criminal activities, after his father released from prison. He also continued his study by joining Lakewood High School. Rod had an early interest in singing. In fact, he used to sing when he was in 5th grade.

Rod started off his music career by releasing several mixtapes. In 2016, he got a wide appreciation for his breakout song titled “Heartbreak Hotel”. The song received a positive response from music lovers. The official video of the song has 4.1 million views on YouTube.

The year 2016 turned successful for him as he earned further recognition after releasing songs “Gambling”, “Think Too Much” and “Hunger Games”. In 2017, he continued his music journey by releasing another mixtape titled “Rookie of the Year”. The mixtape received extensive plays on all streaming platforms.

Rod signed a record deal with Alamo Records in 2018. The year turned out to be more successful for him as he reached the peak of his career with songs “Hearts 4 Sale”, “Bag” and “Feel The Same Way”.

On June 14, 2019, he dropped his new mixtape “PTSD”. The mixtape includes the song called “Heart On Ice”. The single became very popular on YouTube and TikTok. It even peaked its spot on Billboard Hot 100, reaching at Number 25.

On November 1, 2019, he released his solo album titled “Ghetto Gospel”. The album became a massive hit, which peaked at the 10th spot on US Billboard 200. Following that, he dropped his second album titled “Pray 4 Love” on April 3, 2020.

Rod Wave is currently dating a lady named Kelsey H. He even has 2 twin daughters from Kelsey. There is not much information available regarding his love life.

Rod went through a near-fatal car accident in early 2000. Due to the accident, he had internal bleeding in the brain. He has described the bad incident of his life through the song “Through the Wire”.

You May Also Like:   Lil Tecca Net Worth, Age, Bio, Concert, and Real Name

At a young age, Rod Wave has been successful to earn both name and fame. Starting 2022, he has earned an estimated fortune of around $3 million. The amount will be way more bigger in the future, as he has just started his music career.

Trick Daddy Net Worth: How Rich is the Rapper Actually in 2022?