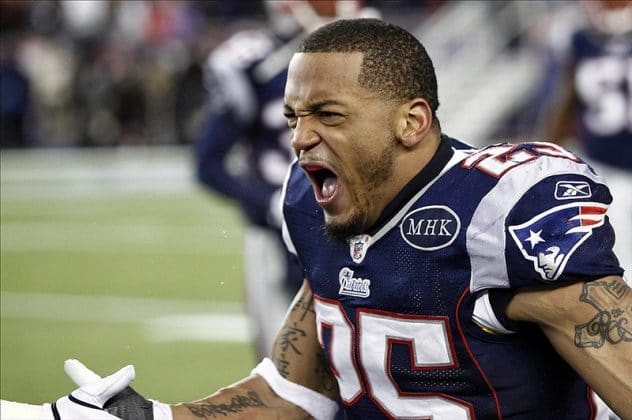 Patrick Chung was recently arrested and charged with domestic assault, battery, and vandalizing property. He appeared in Quincy District Court on Tuesday, October 26, and was released on $10,000 personal surety.

Patrick Chung was born on the 19th of August, 1987 in Kingston, Jamaica. He was born to his parents, Ronald and Sophia George-Chung. His dad was a music producer and used to be a manager of his mother, Sophia, who is a Jamaican reggae artist. Chung grew up with his 4 brothers and 3 sisters.

Regarding his educational background, he has studied at Rancho Cucamonga High School. He used to play as a wide receiver and safety for his high school team. In 2004, he attended the University of Oregon.

Chung was about to forfeit his senior year at Oregon to make an entry in the 2008 NFL Draft. However, later he decided to continue his senior year and on January 24, 2009, he participated in the 2009 Senior Bowl. Chung was projected to be the second-round pick by the NFL draft experts at the end of the pre-draft process in 2009.

You May Also Like:   Lydia Jacoby Net Worth: Height, Age, Bio, Career & More

Chung started off his professional career after he was drafted in the second round of the 2009 NFL Draft. He was selected by the New England Patriots. Patrick played his first NFL game against the Buffalo Bulls in the Patriot’s season-opener. In his first NFL match, he recorded one tackle. Chung completed his rookie year with 37 combined tackles in 16 games and one start.

Patrick was signed to the Philadelphia Eagles on March 12, 2013. He recorded 7 combined tackles in a 33 to 27 victory while playing at the Washington Redskins. However, after that, he suffered a shoulder injury and due to that, he was sidelined for 2 games. In March 2014, he was released by the Philadelphia Eagles, and in April 2014, he started his second stint with the New England Patriots.

Chung made a season-high 11 combined tackles against the Green Bay Packers in November 2014. However, the Patriots lost the match to 26-21. Chung continued his good form with the Patriots until the 2020 season. Although he signed a 2-year contract extension with the New England Patriots through the 2023 season, he chose to opt out of the 2020 season because of the ongoing COVID-19 pandemic. Chung officially announced his retirement On March 18, 2021, after playing 12 seasons.

Patrick Chung is married to the Executive Director of the American Foundation, Cecilia Champion. He tied the knot with Cecilia on June 30, 2012. Together, they share a son named Taj James Chung.

Chung was arrested and charged with assault and battery after a Monday incident where he was accused of pushing a woman to the ground, slapping her in the face, and breaking her phone outside her home. The victimized woman has a child with Chung.

As per the reports, Chung and the woman got into a heated argument over the way he was dealing with their son. The woman reported that Chung told their son “Your mom’s a piece of shit”, and then he pushed her to the ground when she went close to the boy.

Chung was arraigned in a Massachusetts court on Tuesday, October 26, where he was released on $10,000 personal surety. According to the Associated Press, he didn’t testify, and in fact, he revealed that the woman hit him first when he was leaving her house. Chung would be appearing again in court for the next hearing on January 7, 2022.

Dell Curry Net Worth: How Rich is the Retired NBA Player Actually?