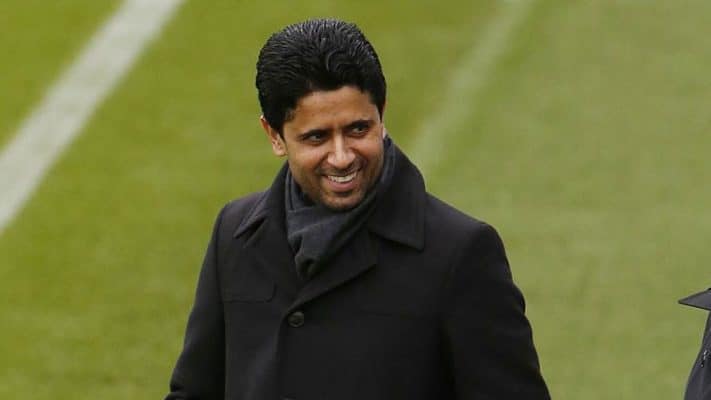 Nasser Al-Khelaifi is a Qatari businessman, who is best known as the President of the professional football club, Paris Saint-German (PSG). Nasser has recently welcomed the living football legend, Lionel Messi to his football club, and he believes that Messi will help PSG make history. As of 2022, Nasser Al Khelaifi net worth is estimated to be roughly $8 billion.

Nasser Al-Khelaifi was born on the 12th of November, 1973 in Doha, Qatar. He has not shared enough information on his past life and parents. However, we came to know that his father is a pearl fisherman.

For his study, he joined Qatar University from where he earned a graduate degree majoring in Economics. Later, he attended the University of Piraeus and received a post-graduation degree.

Nasser was earlier a tennis professional who was considered the second most successful member of the tennis competition team, the Qatar Davis Cup team. He has appeared on two main tours while playing on the Association of Tennis Professionals (ATP). However, he lost the matches each time in the first round.

He lost the first time to former French Open Champion, Thomas Muster in St. Polten in 1996, and then in Dohan in 2001. In late 2002, he reached the career-high singles ranking of 995. As a tennis player, he has won the GCC Team Tournament. After the not so satisfying tennis career, he became the president of the Qatar Tennis Federation in November 2008.

Nasser was elected as the Vice-President of the Asian Tennis Federation in 2011. Likewise, in June 2011, he was appointed as the chairman of the Qatar Sports Investments (QSi). The investment company later acquired the football club, Paris Saint-German (PSG) in June 2011. After the acquisition, he was serving as the chairman of the board, and CEO of the football club. On October 7, 2011, he was appointed as the new president of the PSG.

With the appointment as President, he presented his 5-year plan to make PSG the top football club in France and abroad. He brought the former Brazilian footballer, Leonardo to the club. During the 2011-12 season, the football club failed to show their impressive performance in the UEFA Europa League as they were eliminated soon.

However, in the 2012-13 season, PSG came up with their improved strategy and plans, and as a result, they won the Ligue 1 title. During the season, they also made it to the quarter-final of the UEFA Champions League. PSG finished the top of Ligue 1 in the 2013-14 season with a record total of 89 points. They made it to the quarter-finals again where they were defeated by Chelsea.

Nasser made some brilliant plans in 2012, and according to the plan, QSi made the acquisition of the Paris Handball Club. The club was later merged with the PSG sports franchise to become much wider and more competitive. The same year in 2012, PSG Handball won the LNH Division 1, and since then it has won five times. In the 2016-17 season, the football club reached the EHF Champions League Final.

Al-Khelaifi recently welcomed the former Barcelona star, Lionel Messi to his football club, PSG. According to reports, Messi has signed a 2-year contract deal with PSG. He arrived in Paris via a private jet to sign a contract with PSG on August 10, 2021. Nasser gave happy reactions by Messi getting signed into his team. He said, “I am delighted that Messi has chosen to join PSG and we are proud to welcome him to Paris with his family”.

Nasser Al-Khelaifi is a married man. However, he has not provided detailed information on his family. We are yet to get his wife’s name. As per sources, he has four kids from his married life, and his family is currently residing in Qatar.

Al-Khelaifi has been into legal trouble many times. He was believed to have been involved in bribery during the 2017 and 2019 Doha nominations which were happening for the World Championships in Athletics. However, in February 2020, the bribery charge was dropped by Swiss prosecutors.

Likewise, in October 2020, he was acquitted by the court on an aggravated criminal mismanagement accusation. The charge was made by the Swiss Federal Court on 14 September 2020, related to a meeting that took place at the French headquarter of belN. At the meeting, he promised to purchase a €5m worth villa in Sardinia in exchange to grant the screening rights to belN Media for the 2026 and 2030 World Cups.

As of 2022, Nasser Al-Khelaifi’s personal wealth is estimated to be around $8 billion.  Al-Khelaifi is earning a hefty amount from his number of business ventures, which include the belN Media Group. He is the CEO and chairman of the media group.

Al-Khelaifi was named the most powerful man in French Football in a 30 man list by the French daily sports newspaper, L’Equipe in 2016. Likewise, France Football named him the most influential person in football in March 2020.

Evan Wexler Net Worth: How Rich is the Businessman Actually?