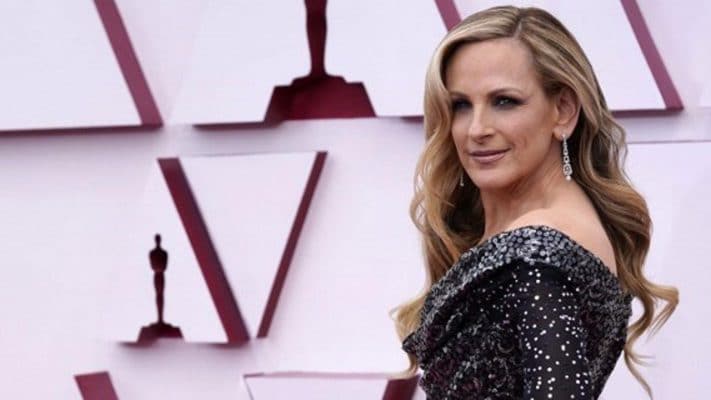 Marlee Matlin is a phenomenal American actress and deaf activist. She is best known for her exceptional performance in the 1986 romantic drama movie “Children of a Lesser God”. Matlin is the only deaf performer ever to receive an Academy Award. As of 2022, Marlee Matlin net worth is estimated to be around $11 million.

Marlee Matlin has recently been featured in the brilliant movie titled “CODA” (Child Of Deaf Adults). In the movie, she got a rare opportunity to work along with the cast of deaf actors.

Marlee Matlin was born on the 24th of August, 1965 in Morton Grove, Illinois, United States. She was born to her parents, Donald and Libby Matlin. Her father, Donald was an automobile dealer. When she was 18 months old, she lost 80% of hearing in the left ear, and all hearing in the right ear due to illness and fever.

Matlin grew up with her two elder brothers named Eric and Marc. She has attended a synagogue for the Deaf. For her study, she joined John Hersey High School and Harper College. Matlin, at that time, wanted to pursue a career in criminal justice. Though, later she became more interested in acting.

Marlee performed on stage for the first time when she was seven. She showed a brilliant performance as Dorothy in the International Center on Deafness and the Arts (ICODA)”. Her first performance came for the children’s theatre group of “The Wizard of Oz”. Then, throughout her childhood, she performed along with the ICODA children’s theatre group.

Matlin was selected for the movie “Children of a Lesser God” after the director and actor, Henry Winkler saw her performing in one of the ICODA theater performances. After the movie got released, she received huge appreciation from the audiences and critics.

Her performance in the movie was a reluctant-to-speak deaf woman who fell in love with a hearing man. Matlin received an Academy Award and a Golden Globe Award for the Best Actress in a Drama for the movie.

Marlee portrayed a deaf parent in the comedy-drama series “Desperate Housewives” in 2006. She also had a recurring role in the TV series “My Name Is Earl”, where she appeared as a public defender.

Matlin participated in the dance reality show “Dancing with the Stars” in 2008. Though, she could not reach far in the show as she was the sixth contestant to get eliminated from the show along with her dance partner, Fabian Sanchez.

Marlee has recently appeared in the comedy-drama movie “CODA”, which follows the story of a hearing teenage girl and her deaf parents. The movie is getting positive reviews from all around, and her performance is receiving a lot of appraisal from the audience. CODA also earned the best ensemble award at the 2021 Sundance Film Festival.

Marlee Matlin is married to Burbank police officer, Kevin Grandalski. She tied the knot to Kevin on 29th August 1993 at the actor, Henry Winkler’s house.

Matlin met Kevin first time while she was filming a scene from the police drama series “Reasonable Doubts”. Kevin was present in the studio to provide security and control the traffic. Matlin shares four kids with her husband, Kevin.

As of 2022, Marlee Matlin’s personal wealth is estimated to be roughly $11 million. She has earned a big amount from appearing in numerous movies and TV series.

Matlin raised the huge charity amount of $986,000 while she appeared on the NBC show “The Celebrity Apprentice”. She competed in the show to raise money for her charity “The Starkey Hearing Foundation”. Marlee finished in second place in the show.

Brett Butler Net Worth: How Rich is the Actress Actually in 2022?