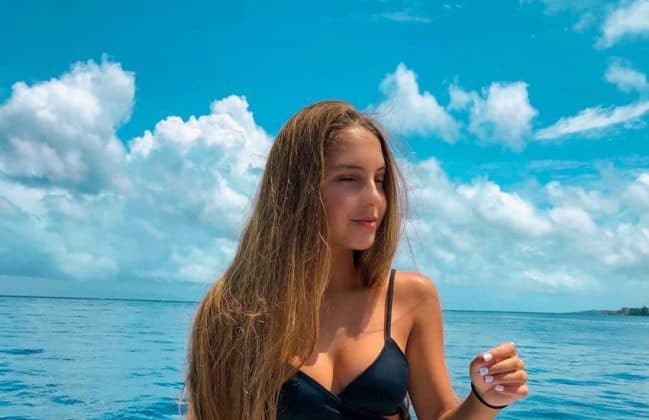 Lexi Rivera is a 21 years old American Instagram and YouTube star. She is best known for posting comedy videos mainly pranks and challenges on her YouTube channel named Alexa River. Lexi is also recognized as a younger sister of popular YouTube star, Brent Rivera. As of 2022, Lexi Rivera net worth is estimated to be around $2 million.

Lexi Rivera was born on the 7th of June, 2001 in Huntington Beach, California, United States. She was born to her parents, John and Laura Rivera. Lexi grew up with three older brothers named Brent, Brice, and Blake Rivera. For her study, she joined the Huntington High School situated in Huntington, West Virginia. She came out holding a high school graduation degree in June 2019.

You May Also Like:   Coryxkenshin Net Worth: How Rich is the YouTuber Actually in 2022?

Rivera opened her YouTube account on August 21, 2010. Although she created the account back in 2010, she made her first YouTube video on July 2, 2018. Her first YouTube video has the title “Wait, Who’s My Favorite Brother? (Q&A)”. The video garnered a good amount of views, and with that, she was motivated to make more videos. Her third video titled “Little Kids Nowadays (Lexi Edition)”, which was uploaded on July 15, 2018, has over 13 million views on YouTube.

Lexi’s most YouTube videos feature her siblings and friends. She has made a lot of collaboration videos with her brother, Brent, which has gathered a maximum number of views. She has even made a video featuring her mother. The video has the title “Teaching My Mom Slang Terms!!”, and it was uploaded on October 7, 2018. Rivera is still entertaining her fans with her YouTube videos. She usually makes two to three videos in a week.

Rivera’s most recent YouTube videos include “I Went On A Date…get ready with me!”, “Testing The Hottest Things You Can Do As a Girl”, “I Stayed 24 Hours Overnight in a Mall!!”, and “I Become A “Mom” For The Day!!”. Her recent video titled “I Trapped The Boys In An Unbreakable Box!!” was uploaded on October 31, 2021.

Lexi Rivera’s present relationship status is believed to be single. In the past, she was in a relationship with a professional skateboarder and YouTube star, Ben Azelart. She was dating Ben since early 2018. Ben and Lexi openly confirmed their relationship in November 2018. Lexi has even featured her ex-beau Ben in her YouTube videos and Instagram posts.

A few months back, she was linked up with the social media influencer. Andrew Davila. On December 13, 2020, she made a video with the title “My Ex Meets My New Boyfriend” featuring her ex-boyfriend Ben, and her rumored present boyfriend Andrew. In the video, she pranked her former boyfriend, Ben by making him believe that she and Andrew are dating. However, the video was just a prank video. At the beginning of the video, she confirmed that she and Andrew are just really good friends.

As of 2022, Lexi Rivera’s personal wealth is estimated to be around $2 million. As per the reports, she earned around 1.5 million views in a day on her YouTube channel. Her estimated daily revenue from YouTube is reported around $12,000, which makes her estimated annual earning of around $4.4 million.

Ireland Boys Net Worth: How Rich are the YouTube Stars Actually?

Huey Haha Net Worth: How Rich was TikTok Star Before his death?