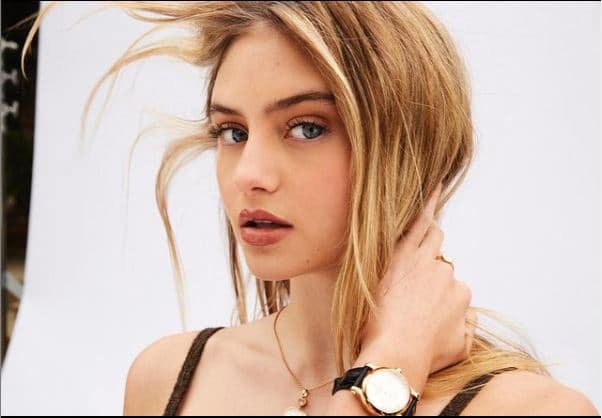 Leni Klum is a 18 years old aspiring American model. She is better known as the daughter of a German-American supermodel, Heidi Klum. Leni has posed for the Glamour Magazine cover in April 2021. Leni Klum net worth is still unknown and is under review at the moment.

Leni Klum has recently made the headline after strutting down the runway for Dolce & Gabbana’s Alta Moda Show on August 29, 2021. The Alta Moda show was held in Venice.

Leni was born on the 4th of May, 2004 in the United States of America. She was born to her parents, Heidi Klum, and Flavio Briatore. Leni was adopted by her mom’s second husband, Seal in 2009. She has three half-siblings from her mother’s side named Lou, Henry, and Johan.

Leni had in her mind from the beginning that she would follow in her mother’s footsteps, and become a successful model. Leni received a modeling offer from the fashion accessories brand, Brandy Melville, when she was just 12. However, her mom, Heidi didn’t give permission to Leni to enter the modeling world at such a young age.

Leni has turned 17 now, and it looks like she has got the approval of her mom to start her modeling career. In December 2020, she appeared on the cover of Vogue Germany along with her mom, Heidi for the January 2021 issue.

Klum has most recently made her mom proud by walking down the runway for the fashion company, Dolce & Gabbana’s Alta Moda show. She looked absolutely stunning in the show, where she wore a bright blue satin ensemble topped with a sequined crown. Her mom, Heidi, who was present in the runway show had all smile during the entire show. Heidi even recorded the cherished moment of her daughter and shared her on Instagram.

Leni Klum currently stands at a height of 5 feet 7 inches or 170 cm tall and weighs around 52 kg or 115 pounds. Her body measurements are not available at the moment. Likewise, her hair color is blonde and eye color is blue.

Leni is currently dating Aris Rachevsky. In February 2021, on the special occasion of Valentine’s Day, she shared an Instagram story tagging her boyfriend, Aris. In one of the photos, she wrote, I love you. Happy Valentine’s Day baby.

Likewise, her beau, Aris shared a photo where he was kissing Leni on the cheek. He also wrote on his Instagram story post, Happy Valentine’s Day. I love you @leniklum.

Some time back it came into news that Leni wanted to get a matching tattoo in the mouth along with her boyfriend. However, her mom, Heidi didn’t allow her to have a tattoo.

Leni has not started her career yet. She has just taken early footsteps toward her modeling career. Looking at her recent runway show, she seems to be becoming the top model like her mom, Heidi Klum.

Leni would surely be receiving more modeling offers in near future, which would make her one of the top-earning young models. As of now, Leni Klum has not disclosed her net worth figure. On the other hand, her mother, Heidi Klum holds a huge net worth of around $160 million.

Cody Rigsby Net Worth: How Rich is the Fitness Trainer Actually?

Ireland Boys Net Worth: How Rich are the YouTube Stars Actually?