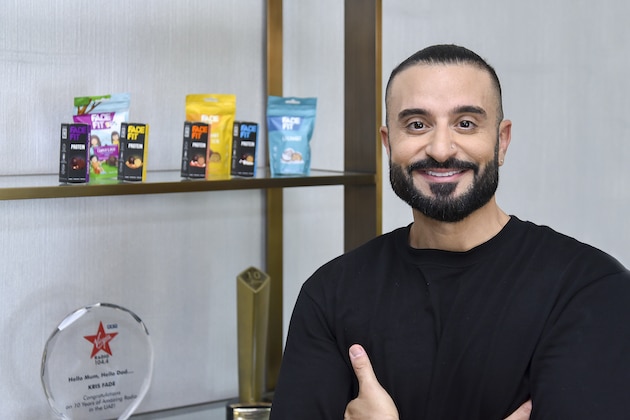 Kris Fade is an Australian-Lebanese radio personality and reality star. He is a famous Radio Jockey who rose to prominence through his breakfast radio show, The Kris Fade Show. Kris has worked with Virgin Radio Dubai and EDGE 96.1. He is also recognized for his appearance on the Netflix series, Dubai Bling. As of 2022, Kris Fade net worth is roughly around $2 million.

Kris Fade was born on February 27, 1980, in Sydney, Australia. He was born to Lebanese parents Gilda and George Fahad. Kris has an older brother, Matty Fahd, who has been featured in the British reality series, Gogglebox. There is not much information regarding his education. However, sources revealed that he failed at school and due to that, he was not able to attend the University.

Kris started living an independent life at 18 years of age. He started living in a studio apartment alone after moving out of his parent’s house. Kris had to bare numerous costs by himself including all the bill payments and the down payment on his car. Though he was going through a hard time, he didn’t give up.

At the early stage of his career, he worked double shifts as a barista. He also worked as a car dryer at a car wash. Kris has in fact worked as a barista for almost 5 years. At that time, he realizes the worth of time and money. After some time, he started working as a radio jockey at a radio station in Sydney. At that time, he used to dedicate around 3 years to working in an Australian radio station. Though he was unsure how his radio jockey profession would go further later.

You May Also Like:   Darci Lynne Net Worth: How Rich is the Ventriloquist Actually in 2022?

Eventually, he got a job with Virgin Radio in Dubai with the help of his boss. He didn’t want to miss the opportunity and moved to Dubai in 2007. However, he was not financially stable to start a new life in Dubai. Due to that, he took a loan from the bank after landing in Dubai. Kris continued working at the radio passing through all hurdles and ultimately building his own reputation as a radio host.

Fade currently works as a host of the popular radio breakfast show, The Kris Fade Show. The radio is broadcasted in Australia and Dubai. Kris has been named Personality of the Year by Ahlan Magazine for five consecutive years since 2011. Additionally, he has been awarded best Radio Dj and Best Personality. In addition to his radio work, he has dropped several songs such as I’m Famous, I Woke Up Like This, and In It For Love.

Kris has recently made his reality TV debut on Netflix’s new reality series, Dubai Bling. In the trailer of the Netflix series, he walked off a private jet with his better half, Brianna, and two kids. The reality series follows the lives of 10 millionaires in Dubai. The first episode of the series premiered on October 27, 2022. Kris recently came out in a defense of Netflix’s Dubai Bling and took to Linkedin where he wrote why the reality series didn’t deserve all the negativity, especially from people within the region.

Kris also mentioned that the Netflix series will revolutionize the region’s film and TV industry adhering to the fact the series is currently in the top 10 charts globally. He further added it doesn’t matter if people like or dislike the show as he believed the show would create more opportunities for local talent. He also earned 50,000 new followers on Instagram in only 5 days after he appeared in the Netflix series.

You May Also Like:   Kendra Wilkinson Net Worth: How Rich is the TV Star Actually?

Kris Fade is currently married to Brianna Ramirez. The pair exchanged wedding vows on March 22, 2022, in Dubai. The pair reportedly came across each other on Instagram and started dating in 2015. Kris proposed to his long-time girlfriend, Brianna in 2019 after being together for four years.  Brianna happily agreed to his proposal. He was previously married to Marianne Argry with whom he shares two daughters named Zahra and Ariani.

Kris Fade’s net worth is estimated to be around $2 million as of 2022. Besides working as a radio presenter, he has launched a company called Fade Fit which produces healthy alternatives to popular snacks. He has also invested in a rental service for fitness trainers called Enhance Fitness. Kris is reportedly making $5500 a month by working with international radio stations like Virgin Radio.

Safa Siddiqui Net Worth: How Rich is the ‘Dubai Bling’ Star?