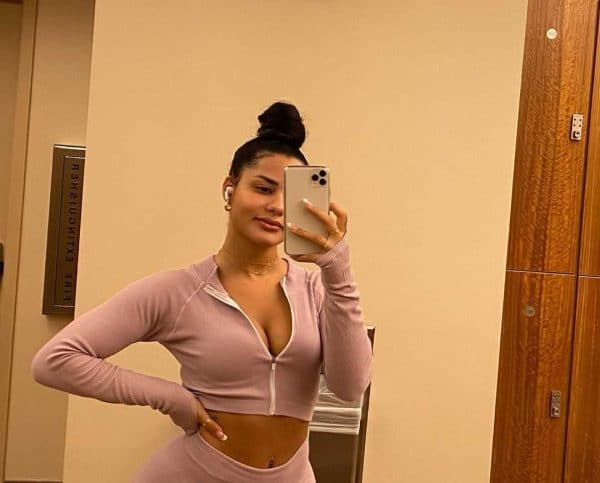 Katya Elise Henry is an American fitness model and Instagram Star. She is best known for posting training pictures and videos on her Instagram, where she has 8.1 million followers. Katya is also the owner of the health and fitness brand “Workouts by Katya”. As of 2022, Katya Elsie Henry net worth is estimated to be around $3 million.

Katya is also known for her relationship with the young NBA star, Tyler Herro, who recently confirmed that Katya is pregnant with his child through Instagram.

Katya Elise Henry was born on the 14th of June, 1994 in Minneapolis, Minnesota, United States. She was born to parents, Derick Anthony Henry, and Tawnya Lynn Nelson. Her father, Derick was a professional bodyguard, and her mother, Tawnya was a personal trainer. Katya has two elder sisters, Tanaya and Gabrielle.

For her study, she joined Prior Lake High School, and Horizon High School. After that, she earned her graduate degree from Desert Mountain High School. She used to be a cheerleader while studying in high school. During that time, she started working on her flexibility, and cardio routines.

Katya initially worked as a nanny for some time before becoming an internet sensation. Around 2013, she posts her first picture on Instagram, where she flaunted off her well-toned abs, and perfect shape body. Soon, the picture started getting the attention of the people and earned her early recognition as a fitness model.

After her picture reaches out to several endorsement brands, she started getting endorsement offers. To date, she has worked on the endorsement of popular brands like Teami Tea Blends, EHPlabs, DreamLab & Co., and BrighterWhite. Likewise, she has been featured on some fitness events like the “Body Power Expo” and Joe Weider’s show Olympia Weekend.

Katya started her own health and fitness brand “Workouts by Katya” in 2016. Through the brand, she started providing exclusive offers of workout plans, supplements, recipe books, gym accessories, and more. Katya also has her own swimwear line.

Likewise, she has her own self-titled YouTube channel, where she shares helpful tips on workout routines, and exercises. Though, she doesn’t seem much active on YouTube nowadays. She made her last video a year ago on April 18, 2020, which had the title “Cooking With Katya! *Banana Bread* Episode 12”.

Who is Katya Elise Henry’s Boyfriend?

Katya Elise Henry is presently in a relationship with Miami Heat guard, Tyler Herro. On June 5, Tyler and Katya, both shared the big news on Instagram that both are expecting a baby together. Tyler posted a black-and-white picture with his girlfriend Katya with the caption “don’t need a wishlist, I’m already gifted”. Katya also shared the same picture with the caption “First came love, then came you.”.

Katya was previously dating NBA Lakers Player, Kyler Kuzma, which lasted for a year from 2018 to 2019. Likewise, she was in a relationship with American singer, Austin Mahone, with whom she broke up in February 2017.

As of 2022, Katya Elise Henry has amassed a total net worth value of $3 million. She has earned a big amount from endorsing several popular brands like EHPlabs, BrighterWhite, and Teami Tea Blends. On the other hand, her boyfriend, Tyler Herro has an estimated net worth of $500 thousand.

LeJuan James Net Worth: How Rich is the Influencer Actually?

Future is an American rapper, singer, and songwriter who is best known for being one of the most influential figures...