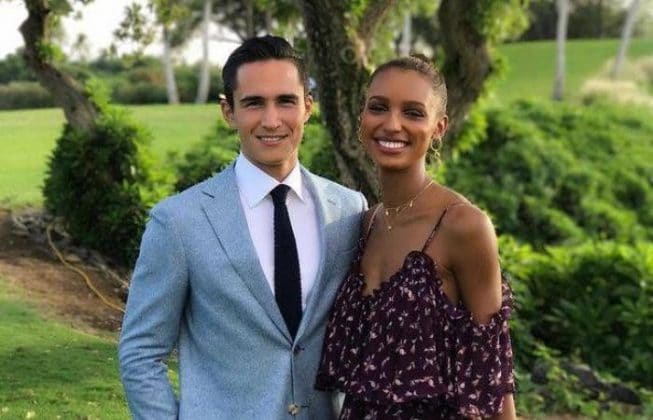 Juan David Borrero is an American entrepreneur, who serves as a director of International markets at Snapchat. Borrero is better known as the husband of Victoria’s Secret model, Jasmine Tookes. Juan and Jasmine married on September 4, 2021, in Borrero’s home country of Ecuador. As of 2022, Juan David Borrero net worth is estimated to be around $6 million.

Juan David Borrero was born in the United States of America. He was born to Ecuadorian politician and neurosurgeon, Alfredo Borrero Vega. His father was elected as the 52nd vice president of Ecuador on May 24, 2021.

Regarding his education detail, he has studied at Stanford University. He attended the University for four years from 2008 to 2012, where he majored in Economics & International Relations.

Juan started his professional career working as a sales and trading analyst at an investment management company, Merrill Lynch. He worked in the company for over a year. In October 2013, he joined the instant messaging app and service, Snapchat.

Borrero was hired at Snapchat as a 23rd employee. Since he joined the company, he has worked in various roles. He was earlier working on marketing campaigns, product launches, and fundraising projects. Juan also looked after the global music, entertainment, and sports, which generated over $100 million in revenue for the company.

You May Also Like:   Winklevoss Twins Net Worth: How Rich are the Brothers Actually?

Before that in 2014, he helped the company to launch its first partnered product; Geofilters in partnership with The Getty Museum, Disney, LACMA, and others. Juan was also responsible for selling Snapchat’s first-ever advertisement in Out Story to Samsung in 2014. He is currently working as a director of International markets at Snapchat.

Juan David Borrero is married to his longtime girlfriend, Jasmine Tookes. He met Jasmine for the first time in 2016. Both happened to meet through their jobs when Snapchat hired her to promote their new feature, Group Stories.

Juan and Jasmine met in L. A. during the fashion show, and at the end of the show, they went on lunch with some other friends. Jasmine later invited him to her birthday party, and they slowly started getting connected to each other. The pair have been celebrating their first meeting day as an anniversary every year where they spent some quality time on an exciting trip.

The longtime couple officially tied the knot on September 4, 2021. They exchanged their wedding vows in Juan’s home country of Ecuador. Jasmine looked gorgeous in her wedding dress. After the wedding, she shared a post on Instagram with the caption “Still can’t believe I’m living in a real-life fairytale with you @juandavidborrero. I’m officially Mrs. Borrero.”

You May Also Like:   Tony Blevins Net Worth: How Rich is Apple's Ex VP Actually?

As of 2022, Juan David Borrero’s personal wealth is estimated to be around $6 million. Juan has most probably gathered a huge amount through serving at the messaging app and service, Snapchat. On the other hand, his better half, Jasmine Tookes holds a total net worth of around $8 million.

Nirav Tolia Net Worth: How Rich is the Founder of Nextdoor Actually?