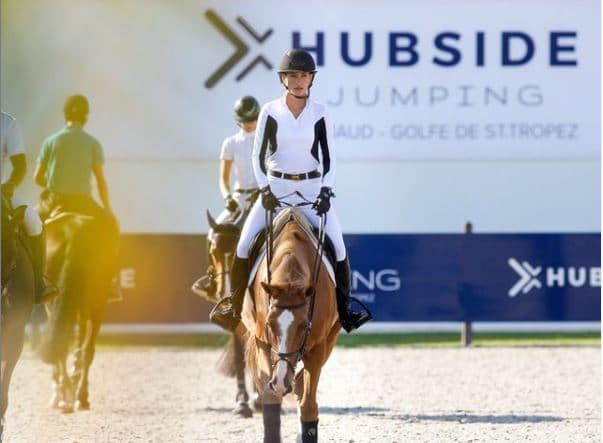 Jessica Springsteen is 30 years old American equestrian, who would be making her Olympic debut as a member of the U. S. Olympic equestrian team in Tokyo, Japan. She is also known as the daughter of famous musicians, Bruce Springsteen, and Patti Scialfa. As of 2022, Jessica Springsteen net worth is estimated to be roughly $3.5 million.

Jessica Springsteen was born on the 30th of December, 1991 in Los Angeles, California, United States. She was born as the only daughter of popular music artists Bruce Springsteen, and Patti Scialfa. Jessica has two brothers; Evan James, and Samuel Ryan Springsteen. In the early 1990s, she along with her family left Los Angeles and moved to Colts Neck Township, New Jersey.

Regarding her education, she has studied at the Rumson Country Day School. Later in 2014, she joined the Duke University, where she received an undergraduate degree.

Jessica has chosen a different path than her parents. Since 4 years of age, she developed an interest in horse riding, and she has been following her passion till now. She was actually grown up in Springsteen family’s 300-acre Stone Hill Farm, which is based in Colts Neck, New Jersey. By reaching six, she rode on her first pony.

Springsteen first competed at the pony division on Washington International Pony Equitation Classic. She eventually came out as a winner of the pony division. When she turned a teenager, she competed at ASPCA Maclay National Championship in 2008. She was able to come back lifting the championship trophy. Likewise, she was the winner of the George H. Morris Excellence in Equitation Championship in 2009.

Jessica went on to compete in the Royal Windsor Horse Show competition in 2011. She was competing in the Horse Show as an adult competitor riding her horse, Vordnado Van Den Hoendrik. After a year in September 2012, she purchased a gold medal-winning horse, Vinidcat W. from Peter Charles. The horse had participated at the 2012 Summer Olympics representing Great Britain.

Jessica has already made an appearance as an alternate horse rider at the 2012 Summer Olympics representing the United States. She had also got the victory in American Gold Cup in 2014. Springsteen worked hard to get selected in the United States Equestrian Team for the 2016 Summer Olympics. She was able to get the first 5 star Grand Prix Jumping competition riding a horse, Cynar VA. However, despite the great effort, she didn’t make it to the list of the Equestrian team.

Springsteen has been training with the best trainers from the beginning. In May 2015, she started getting training from the Australian showjumper, Edwina Tops-Alexander. All her hard work and training finally paid off after she made into the list of US equestrian team who would be competing in Tokyo, Japan in few months. She was selected in the team of four riders along with McLain Ward, Laura Kraut, and Kent Farrington.

You May Also Like:   Charlie Watts Net Worth: How Rich Was the Rolling Stones' Drummer?

Jessica Springsteen currently stands at a height of 5 feet 6 inches or 168 cm tall and weighs around 50 kg or 110 pounds. Her body measurements are not available at the moment. Likewise, she has brown hair and a pair of dark brown eyes.

As of 2022, Jessica Springsteen’s net worth is estimated to be around $3.5 million. On average, the equestrian makes an annual salary of around $41,040. Springsteen is competing in equestrian events for a long time, which makes us assume that she has gathered a hefty figure from participating in various championship events. On the other hand, her father, Bruce Springsteen holds a huge net worth value of $500 million.

An error has occurred, which probably means the feed is down. Try again later.
Related Topics:Featured
Up Next

Jonathan Owens Net Worth: How Rich is Simone Biles’ Boyfriend?