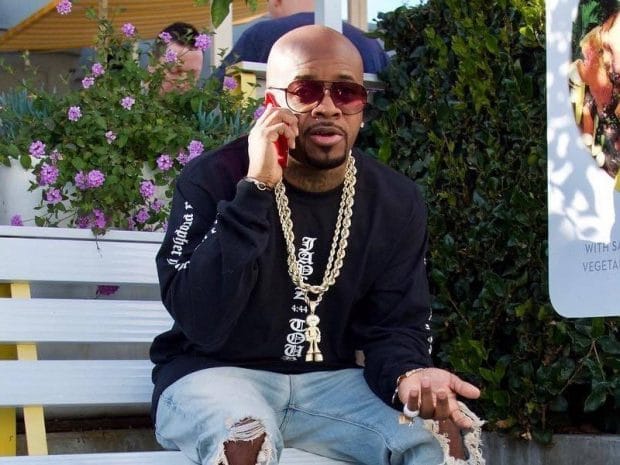 Jermaine Dupri Mauldin is an American record producer, songwriter, and entrepreneur. Over the years, Dupri has worked with several high-profile artists for their songs and projects such as Usher, Mariah Carey, Jay-Z, and Janet Jackson that has reached millions of people. As of 2021, Jermaine Dupri net worth is estimated to be around $2 million.

Jermaine’s father was a talent manager based in Atlanta who would help Dupri to get early exposure to the world of music and doing performances. When he was only 10 years old, his father had managed a Diana Ross show where Dupri got the chance to dance on the stage alongside Diana Ross herself.

This led to Dupri working as a dancer in his teenage years through the group he was a part of called Whodini. Among his early performances included was the performance he did in one of their music videos that were called Freaks Come Out at Night. He then went on to make several performances throughout the country including in music festivals.

Jermaine Dupri Net Worth and Career

Dupri started with production through his collaboration with the hip-hop group called Silk Tymes Leather. He was also the mastermind behind creating the duo called Kris Kross and helped to produce their debut album as well which was called Totally Krossed Out. This brought huge success to both Dupri and Kris Kross since the album became a multi-platinum hit.

He then worked with Xscape with whom he saw potential and decided to sign them to his record label. For them, he produced their album called Hummin’ Comin’ at ‘Cha. This album included some hit singles including Just Kickin’ It that that managed to peak at the number 2 spot in the Billboard Hot 100.

His record label So So Def Recordings was starting to attract a lot more stars including Da Brat through whom he released the album called Funkdafied which also became a platinum level hit. Dupri has gone on to document all the stories of his career through a memoir he wrote called Young, Rich and Dangerous: The Making of a Music Mogul which was released in 2007.

Drupi also has another daughter named Jalynn with Sarai Jones whom he was ordered by the court to offer $2500 every month after it was found out that Drupi was a father through a paternity test. Drupi has mentioned that he lives with a vegan diet which he has endorsed over the years.

As of 2021, Jermaine Dupri has an estimated net worth of $2 million. Though Dupri has been able to amass a good fortune, his net worth would have been a lot higher if it were not for his financial mismanagement that has led to a severe depletion of his net worth. It is estimated that at the height of his career in 2006, he had a net worth of $60 million.

However, some of his problems included unpaid taxes which accumulated over time. This along with the fact that he had financed to buy some expensive mansions led to him having financial problems. By 2011, he had to foreclose one of his mansions in Atlanta since he had taken out money by putting the property as collateral.

Lil Yachty Net Worth: How Rich is the Rapper Actually in 2021?

Da Brat Net Worth: How Rich is the Rapper Actually in 2021?

Shawntae Harris, better known as Da Brat is a 47 years old American rapper. She is best known as the...

Tory Lanez Net Worth: How Rich is the Candian Rapper Actually in 2021?

Yak Gotti Net Worth: How Rich is the Rapper Actually in 2021?

Yak Gotti is an American rapper and songwriter. He is part of Young Thug’s record label called YSL Records and...

NORE Net Worth: How Rich is the Rapper Actually in 2021?

Victor Santiago, Jr., better known as N.O.R.E. or Noreaga is a 44 years old American rapper. He is best recognized...

Mackenzie Hughes is a 30 years old Canadian professional golfer. He is the first rookie to get a wire-to-wire victory...

Casey Austin Keenum, who is better known as Case Keenum is an American football player who plays for the Cleveland...

Bruce Anthony Buffer is an American professional mixed martial arts ring announcer who is best known for being the main...

Jon Gruden is a 58 years old American football coach. He is best known as the former head coach of...

Darius Miles is a 39 years old retired American professional basketball player. He was drafted third overall straight out of...

Terrence Williams is a 34 years old retired American professional basketball player. He is best known for playing in the...