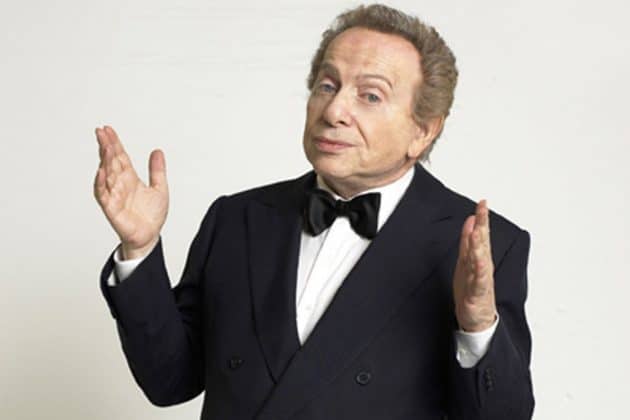 Yacov Meshe Maza, who is better known as Jackie Mason, was an American stand-up comedian and actor who is regarded among the greatest stand-up comedians ever. He was best known for the show The World According to Me which is the recipient of several awards including the Special Tony Award. Jackie Mason net worth before his death is estimated to be around $9 million.

Jackie Mason has a family background of rabbis as even his great-great-grandfather was a rabbi. Because of this, even though Mason grew up in the U.S. he was taught all the religious Jewish texts growing up.

In his teenage years, he worked as a busboy and later as a lifeguard though he himself didn’t know how to swim. He graduated in 1953 with a Bachelor of Arts degree from the City College of New York. At the age of 25, he would be ordained as a rabbi after receiving a semikhah from Rabbi Moshe Feinstein.

Jackie Mason Net Worth and Career

Though he was a rabbi, he would eventually make the shift to being a comedian three years after his father died because someone in the family needed to make a living. He started as a comedian at the Fieldston Hotel in 1955. However, some of his material felt too extreme and so he was let go. Over the years, the audience would also start to relate to the kind of sketches that he was making.

You May Also Like:   James Spader Net Worth, Wife, IMDB, and Avengers

However, he has had a lot of controversies as well. Among the biggest controversies was during the Ed Sullivan Show in 1964 where he had shown the middle finger to the host on air. This footage led to him being banned from the show for future appearances along with his six appearance contract worth around $375,000 in today’s terms coming to an end. This did hamper his brand at the time which carried on throughout his career. He even mentioned later in his career that it took him 20 years to overcome what happened in a minute.

Mason also made a big name for himself in the Broadway theater where he made his debut in the play called A Teaspoon Every Four Hours. Among his biggest success on Broadway has been The World According to Me which was a one-man show he did having made more than 550 performances over two stints at Broadway.

In 1991, Jackie Mason married his manager named Jyll Rosenfield. Mason has a daughter named Sheba Mason who is also a comedian. In 2021, at the age of 93 Mason passed away after having difficulty breathing for two weeks.

As of 2022, Jackie Mason had an estimated net worth of $9 million. Mason earned a vast chunk of that money appearing on different television, film, radio roles, and of course as a comedian. He has also written several books to his name which must have contributed somewhat to his personal wealth.

Lorenzo Lamas Net Worth: How Rich is the Actor Actually in 2022?