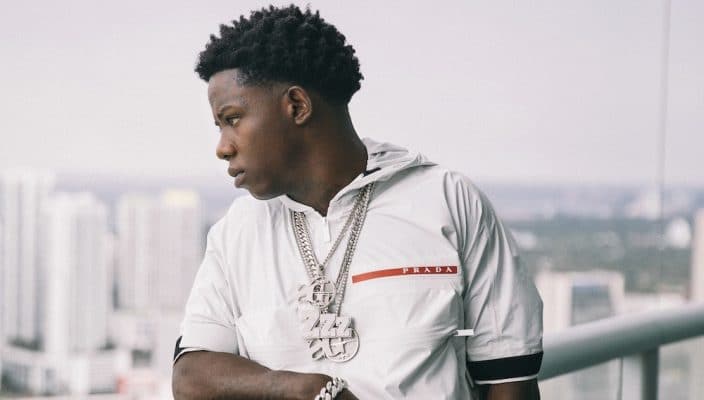 Pierre Delince, better known as JackBoy is a 24 years rapper from Florida. He is best known for his collaboration with fellow rap artist, Kodak Black. JackBoy came up with his first mixtape “Stick Up Kid” in 2016. As of 2022, JackBoy net worth is estimated to be around $2.5 million.

JackBoy’s long-time best friend, Kodak Black shared a cryptic post targeting JackBoy on June 29, 2021. Through the tweet, it seems that both are not on good terms now.

JackBoy was born on the 27th of August, 1997 in Haiti. His real name is Pierre Delince. His parents moved to the United States when he was 6 years of age. He has stayed in different cities in South Florida before settling down in Pompano Beach. JackBoy belongs from a Haitian background, and he is really proud of that. In fact, he has made the song titled Spittin Facts, which he released on May 18, Haitian Flag Day.

JackBoy grew up in the poverty, which led him towards the path of crime. He has even admitted that growing up on the streets pushed him towards crime. JackBoy was arrested the first time when he was 11 years of age after breaking into someone’s house. He spent in jail for just one day after he was caught. JackBoy continued to get involved in criminal activities as he grew older, and thus he was sent to Juvenile Detention Center. He stayed in the Detention Center until he reached 17.

Though, even after coming out of the detention center, he continued to get into trouble. When he turned 18, he busted into other crimes such as credit card fraud, aggravated battery, and armed robbery. In fact, he got his named JackBoy, which identifies him as a person who commits robberies. He got into big trouble by reaching 22, as he was locked up in jail for 8 years.

During the time he spent in jail, he learned to become more observant and patient. He looked up to be a rapper while staying in jail. JackBoy started his music career by freestyling. He recorded his first freestyle song in 2016, where he rapped over Bobby Shmurda’s song “Hot Nigga”. In December 2016, he released his first mixtape titled “Stick Up Kid” featuring his old friend Kodak Black, and PnB Rock.

Even after releasing the mixtape, he was not taking music seriously. He thought of making music his career after he was sent to jail again. The time when he was locked up in jail, he realized that the rap can actually save him from getting into more trouble. JackBoy was arrested last time in August 2019 for a probation violation, and possessing weed. Though, he spent just a day in jail and was released the following day.

Earlier, JackBoy sounds similar to his best friend Kodak. But, as he spent more time in the studio during these four years, he was able to find his own distinctive sound. His unique voice can be heard on the song titled “Bipolar”, which is from his 2019 mixtape “Lost In My Head”.

You May Also Like:   Jeezy Net Worth, Age, Bio, Wife, and Albums

He released his first album “JackBoy” in April 2019. His album was included on the 96th list on Billboard 200. To date, he has released seven albums. His most recent album “Love Me While I’m Here” was released on December 18, 2020.

JackBoy was dating a girl named Jolene in 2020. He is possibly single right now since there is no news of him dating anyone. JackBoy has been recently in the limelight after his so-called best friend Kodak Black posted a tweet mentioning someone ungrateful. JackBoy instantly got to know that the tweet was for him, and he replied to him with the lyrics of Kevin Gate’s song “Vouch”.

Even though the two best friends have been inseparable since they were kids, something might have gotten in their way and led them to heated arguments on Twitter. Later on, JackBoy came on Instagram Live and mentioned Kodak as his brother.

As of 2022, JackBoy has gathered a whopping net worth equal to $2.5 million. Though he never dreams to be a rapper, he is quite happy to get a house and a car for his mom. He is even thankful to his brother, Kodak, for whom he said “I got three cars, paid off. I won. Like, I’m not finna come on here and talk bad about my brother”.