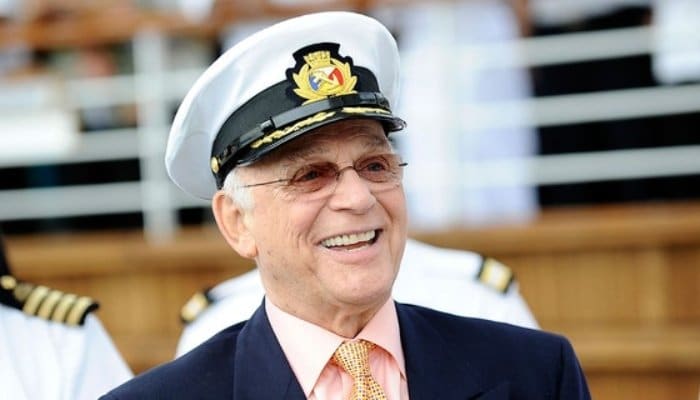 Gavin MacLeod was an American actor, politician, Christian activist, and author. He is best known for his performance as Captain Merrill Stubing on ABC’s comedy-drama TV series “The Love Boat”. Gavin recently took his last breathe on May 29, 2021, at 90 years of age. Gavin MacLeod net worth before his death is estimated to be around $10 million.

Gavin MacLeod was born Allan George See on 28th February 1931 in Mount Kisco, New York, United States. He was born to parents George and Margaret See. His father, George was an electrician, and his mother, Margaret has worked for the family magazine, Reader’s Digest. He had a younger brother named Ronald.

Gavin was interested in acting from an early age. To pursue a career in acting, he joined Ithaca College, from where he earned a graduate degree in fine arts in 1952. He had earlier worked in the U. S. Air Force for few years. However, later he shifted to New York City and followed his dream of becoming a famous actor. Soon, he started working at Radio City Music Hall. During that time, he changed his name to Gavin MacLeod.

MacLeod made his small screen debut in 1957 by appearing in the crime drama series “The Walter Winchell File”. After a year, he appeared in a small role in the movie “The True Story of Lynn Stuart”. That same year in 1958, he earned his first credited role in the prison drama series “I Want to Live!”. His outstanding performance in the series was later noticed by the filmmaker, Blake Edwards, who cast him in NBC’s series “Peter Gunn”.

Gavin got his first regular TV role in 1962 by appearing as Joseph “Happy” Haines on the TV series “McHale’s Navy”. He played the role for two seasons, and left the series to make an appearance in the motion picture “The Sand Pebbles”. MacLeod got his breakthrough role in CBS’s television sitcom “The Mary Tyler Moore Show”. His incredible performance in the series earned him 2 Golden Globe nominations.

MacLeod later received wide recognition after he appeared as Captain Stubing on ABC’s TV series “The Love Boat”. The TV series was broadcast in a total of 90 countries between 1977 and 1986. He received 3 Golden Globe nominations after showing up amazing performance in the series.

Besides acting, Gavin has also worked as the honorary Mayor for the Westside region of Los Angeles, Pacific Palisades. He served as a Mayor for 5 years until Sugar Ray Leonard was appointed new mayor in 2011. Gavin joined his former castmates of Love Boat on November 5, 2013, on CBS’ daytime time “The Talk”. It was a reunion special, which went for a full one hour. Later in January 2015, along with his The Love Boat castmates, he appeared in the Rose parade.

Gavid MacLeod was married twice. He was first married to Joan Rootvik in 1954. With Joan, he had 2 sons and 2 daughters. Gavin ended nearly two decades of his relation with Joan in 1972 with divorce.

In 1974, he got married to Patti Kendig. The couple separated with divorce in 1982, however, they reunited and got married again in 1985. He has also briefly mentioned his struggles with divorce in his book “Back On Course: The Remarkable Story of a Divorce That Ended in Remarriage”.

You May Also Like:   Bryshere Gray Net Worth: How Rich is the 'Empire' Actor Actually?

Gavid MacLeod passed away on May 29, 2021, at his house in Palm Desert, California. He reportedly left the world after suffering from a period of ill health. His nephew, Mark See gave confirmation to his death news.

Gavid MacLeod has definitely won the hearts of many people through his extraordinary performance in various TV series and movies. He has in fact dedicated over 50 decades to the entertainment industry. Gavin had gathered a total net worth value of around $10 million before his demise on May 29, 2021. He has also written a book based on his personal life memories “This Is Your Captain Speaking: My Fantastic Voyage Through Hollywood, Faith & Life”.

Joe Lara Net Worth: How Rich Was Joe Lara Before His Death?