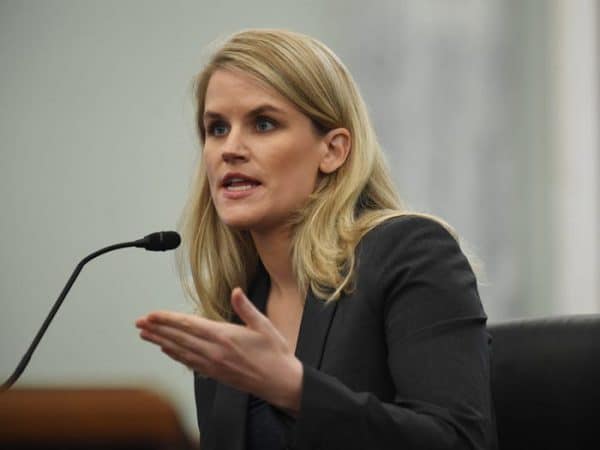 Frances Haugen is an American data scientist, who is better known as a whistleblower and former Facebook employee. She revealed herself as the information leaker of Facebook’s internal documents on CBS News’ show “60 Minutes” on Sunday, October 3, 2021. As of 2022, Frances Haugen net worth is estimated to be around $1 million.

Frances arrived to testify before a Senate Committee on Tuesday, October 5, 2021, claiming that Facebook prioritizes profits over public safety.

Frances Haugen was born in the United States. She is reported to be 38 years of age. Nothing much is available in her early life and parents. As per the reports, it is revealed that she is originally from Iowa. She has studied at Olin College, and she was a member of the college’s first graduating class in 2006.

Frances then joined Harvard University from where she completed her Master’s degree in Business. Following graduation, she has worked for big companies like Google and Pinterest.

Frances joined Facebook as a product manager in 2019. According to her website, she was working in the Facebook civic integrity department to deal with the issues related to democracy and misinformation.

Frances revealed her identity as the information leaker of Facebook’s Internal document on CBS News’ show “60 Minutes” on October 3, 2021. In the show, she admitted that she was the one who filed complaints with federal law enforcement. She also revealed Facebook’s own research that presented the true fact about the platform which shows how the social media platform is amplifying hate, misinformation, and increasing political polarization.

After appearing on the 60 Minutes show, she delivered the congressional testimony against Facebook before the Senate Committee on October 5. Before the Senate, she accused Facebook of putting profits over public safety. In her opening remarks, she said, “Facebook consistently resolves conflicts in favor of its own profits. The result has been more division, more harm, more lies, more threats, and more combat.”

Frances Haugen’s present relationship status is unknown. She seems to be a married woman. However, we have not got any detail on her husband yet. Frances is quite concerned about young people especially young girls and women who are affecting their mental health due to Facebook and Instagram.

As of 2022, Frances Haugen’s personal wealth is estimated to be around $1 million. She must have earned the hefty sum from working in big companies like Google, Pinterest, and Facebook.

Emma Grede Net Worth: How Rich is the CEO of ‘Good American’?