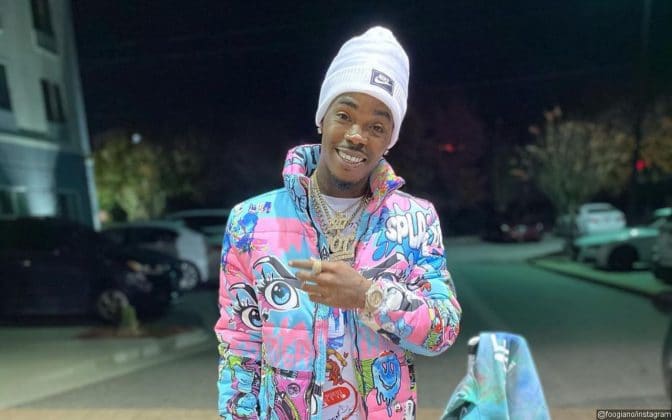 Kwame Khalil Brown, better known as Foogiano is an American rapper. He is best known for his hit song Molly, released in 2020. Foogiano is currently signed under Atlantic Records. As of 2022, Foogiano net worth is estimated to be around $150 thousand.

Foogiano was born Kwame Khalil Brown on July 4, 1993, in Greensboro, United States. He has not shared enough information regarding his early life, parents, and education detail. Though we got to know that he was raised by a single mother with four siblings.

Foogiano was following his musical dream from an early age. He came into notice with his debut mixtape “Gutta Baby”, released in 2017. Foogiano released parts 2 and 3 of his mixtape in 2018 and 2019.

It was in 2020 when his fortune shine after he came up with the song Molly. He sang the song in the Authentic Empire Music Group Rap Competition. With his fabulous song, he won the rap competition along with the prize amount of $10K.

The official music video of the song, Molly was released on January 20, 2020. It became a massive hit, receiving over 82 million YouTube views. Just after two months, he came up with another song “Trapper (FlyVision). The official video received over 6.3 million views on YouTube.

You May Also Like:   Young Nudy Net Worth, Age, Merch, and Tour

Foogiano came up with the remix version of his song, Trapper on March 9, 2020. The song featured the famous rapper, Lil Baby. The song went to receive over 22 million YouTube views. He continued to work on his other songs, after few hit songs.

Foogiano has also featured Pooh Shiesty on his song “Lesson”, which released in July 2020. The music video of the song has crossed over 10 million views on YouTube. Likewise, he featured Gucci Mane for his song “Ballin’ On A Bitch”. He has recently released two songs “Intro” and “Free Foo”, which has gone for over 1 million YouTube views.

Foogiano stands at a height of 5 feet 10 inches or 178 cm tall and weighs approximately 75 kg or 165 pounds. His body measurements are not available at the moment. Likewise, his hair color and eye color are both black.

Foogiano has not provided detailed information regarding his personal life. A few times back in December 2020, he welcomed his newborn child. He even shared a picture of his baby girl on his Instagram. Though, the name of his lady love has not got revealed yet.

Foogiano was arrested in March 2020, with the charge of possessing a firearm by Memphis police. Later, he was released in December 2020 paying a $50,000 cash bond for probation violation.

Foogiano has amassed an approximate fortune of $150 thousand by 2022. He has collected all the money from his music career. He also has a 356K people subscribed YouTube channel. Foogiano might be generating a hefty sum from the channel as well.

PnB Rock Net Worth: How Much is PnB Rock Worth Actually?