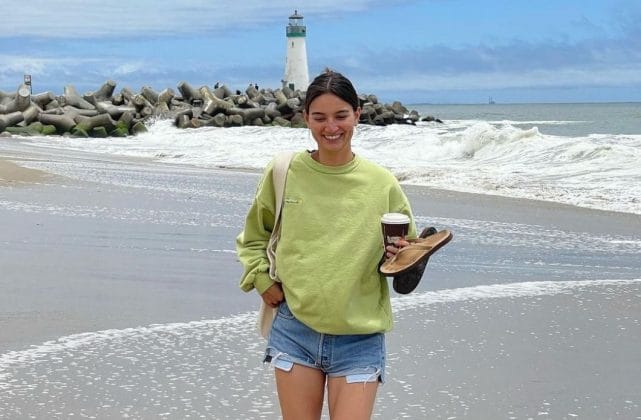 Emily Marko is an American YouTube and TikTok star. She is best known for posting a combination of style videos, fashion content, cooking, and skincare routines on her self-titled YouTube channel where she has over 347K subscribers. Her popularity recently exploded on TikTok after her video making a salmon rice bowl went viral on TikTok. As of 2021, Emily Mariko net worth is estimated to be roughly $300 thousand.

Emily Mariko was born on the 9th of January, 1992 in Los Angeles, California, United States. She belongs to half-Japanese and half-American descent. Emily has not shared enough details regarding her early life and parents. For her study, she attended Columbia University from where she majored in neuroscience.

Emily came into recognition through her YouTube videos. She created her YouTube channel on December 28, 2010. Emily made her first YouTube video on June 12, 2012, which has the title “June 11, 2012 Outfit”. After her first video, she continued to make more videos showing her daily outfits. As the year passed on, she started getting more views and subscribers.

Mariko also added more content to her videos. She started making videos showing her fashionable bags and shoes. On May 11, 2016, she made a video with the title “Apartment Tour 2016!”. As of now, the video has crossed over 202K views. From her long journey on YouTube, she is able to get over 347K subscribers to date.

Emily is currently making videos on fitness, health, outfits, and cuisines. Her most recent videos include “What I Eat in a week, cooking for two!”, “Outfits of the week cute & casual summer fits *explained*”, “VLOG HomeGoods shop with me & haul, decorating the kitchen, moving updates!”, “Moving Vlog 5 finally selling all of my clothes, new bedding, healthy routines!”, and “VLOG full week of workouts, cute activewear, living a healthy lifestyle!”.

Mariko has likewise become popular on TikTok. Her TikTok profile skyrocketed in September. In the month of September, her followers skyrocketed from 223,000 to 2.4 million. The success behind her over a night’s popularity on TikTok is a viral video which she posted on September 21. Till now, she has more than 3.9 million followers on her TikTok account (as of October 5, 2021).

In a viral TikTok video, she was seen making a lunch bowl combining rice, leftover salmon, kewpie mayo, soy sauce, sriracha, avocado, eaten with roasted seaweed, and kimchi. Emily, at first made a different version of the dish on 25th August. At that time, she had not added kewpie mayo, avocado, and the ice cube on the dish, but after receiving the suggestion from the commenters, she added more ingredients and came with the new version in September.

You May Also Like:   Lilly Singh Net Worth: How Rich Is the Entertainer in 2022?

After her meal video gone viral, she is now posting mostly meal videos on TikTok. She is much of the time seen making salmon for dinner. She would even give a hint through a video that she would be putting leftover salmon for the next day.

Emily Mariko has not provided any information regarding relationship affairs. She has not even made any videos related to her boyfriend and love matters. Emily might be enjoying her life being single at the present moment. She is equally getting popular on Instagram. Her official Instagram account, emilymariko currently has 135k followers.

As of 2021, Emily Mariko’s personal wealth is estimated to be around $300 thousand. She must have generated the handsome figure from YouTube and TikTok. Emily’s self-titled YouTube channel currently has over 33 million views.

Khaby Lame Net Worth: How Rich is the TikTok Superstar Actually?