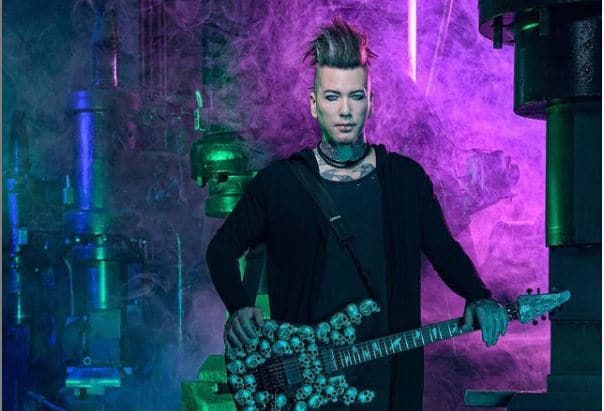 Daren Jay Ashba, better known as DJ Ashba is a 49 years old American musician, guitarist, record producer, and songwriter. He is best known as the lead guitarist of the hard rock band, Sixx: A. M. Ashba is likewise known for his association with the other hard rock bands Guns N’ Roses, BulletBoys, and Beautiful Creatures. As of 2022, DJ Ashba net worth is estimated to be around $10 million.

DJ Ashba was born Daren Jay Ashba on the 10th of November, 1972 in Monticello, Indiana, United States. He spent his childhood days growing up in Fairbury, Illinois. Ashba was introduced to music by his mother since he was a toddler. His mother was actually a classically trained pianist. When he reached five, he performed in his first piano recital where he played Beethoven’s song Ode to Joy.

Ashba’s interest in music was growing as he grew up. After excelling in piano, he had the ambition to learn the drums. He used to gather garbage cans, pots, and pans and used to play drums out of it. When he became six years old, he got the real drum set. He purchased his first guitar at 8 years of age on his own by taking a job where he was responsible for detasseling corn in the fields. While doing the job, he was introduced to the guitar by the guitarist from a local band who used to teach him while traveling on the same bus through which he used to get on his job.

You May Also Like:   Maluma Net Worth, Age, Bio, Girlfriend, and Tour

Ashba decided that he would perform live with the rock band one day when his father took him to the concert on his 16th birthday. He was absolutely mesmerized by the crowd, music, lights, and musical environment. When he turned 18, he moved to Hollywood and started his musical journey.

In 1991, he joined the group called Barracuda. Along with the musical group, he went on a tour for two years. By reaching 1996, he dropped his first instrumental album titled “Addiction to the Friction”. He joined the new band “BulletBoys” in 1998. Ashba performed with the band for a year till 1999, and he started performing with the band “Beautiful Creatures”. He was with the band for three years.

In 2002, he focused on his solo music band, and soon he came up with a solo band named ASHBA. He set up the Funny Farms Studios along with the musician, Nikki Sixx in 2006. Both wrote, produced, and performed music together. Along with Nikki Sixx, he worked on the critically acclaimed album titled “The Heroin Diaries Soundtrack”.

Ashba started his new journey in 2009 by being the new lead guitarist of the heavy rock band, Guns N’ Roses. After performing six years with the band, he announced on July 27, 2015, that he would be leaving the band to focus on his other band, Sixx: A.M. and to fulfill his commitment to his family. Ashba announced the formation of a spin-off band of Sixx: A.M., named Pyromantic in February 2018.

You May Also Like:   Willie Spence Net Worth: How Rich was the Singer Actually?

DJ Ashba is a married man who tied the knot with actress and model, Nathalia Henao on 23rd September 2013. He met her first time in Rome around 2010. Ashba shared the engagement news in August 2013 through a tweet. In the tweet, he shared a photo where Henao was flaunting her engagement ring.

DJ Ashba has accumulated the total net worth amount of $10 million by 2022. Besides gathering vast chunks of money from his music career, he is also earning a hefty sum from his two corporations named Ashbaland Inc. and Ashba Media, Inc.

Chucky Thompson Net Worth: How Rich was the Record Producer?