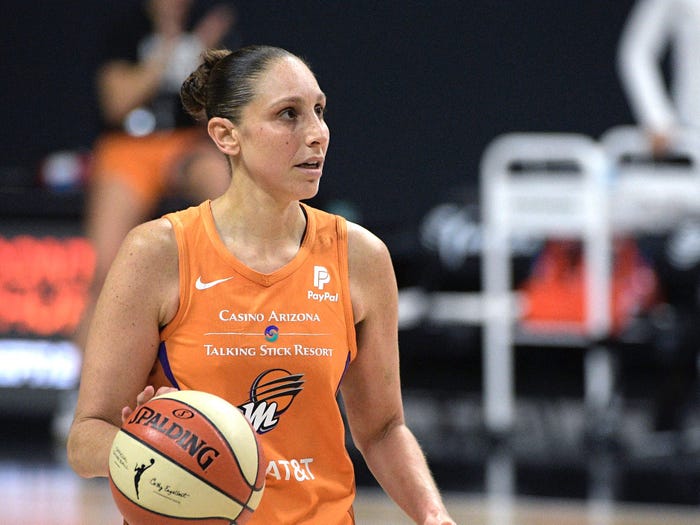 Diana Lorena Taurasi is an American professional basketball player who plays for the Phoenix Mercury in the Women’s National Basketball Association(WNBA). She has won three WNBA championships in her career along with three FIBA World Cups and is considered to be among the best female basketball players of all time. As of 2022, Diana Taurasi net worth is estimated to be around $2 million.

Diana was born on June 11, 1982, in Glendale, California. She studied at Don Antonio Lugo High School where she started to play basketball. Her father being a professional soccer player influenced her to be involved in sports as well. During her high school days, she was named the best player in Southern California and even received the 2000 Cheryl Miller Award. That same year, she also won the 2000 Ms. Basketball State Player of the Year.

She then joined the University of Connecticut where she was a key player for their team in helping them to win three NCAA championships. She excelled during her time there winning the Huskies of Honor award there and was now ready to step forward as a professional.

Diana Taurasi Net Worth and Career

Diana was selected as the first overall during the 2004 WNBA draft by the Phoenix Mercury. In her debut season, Diana was successful in winning the WNBA Rookie of the Year Award. Over the years, Diana became a key player for the Phoenix Mercury. She would help her team to advance to the WNBA finals in 2007 and along with other stars such as Taylor and Pondexter managed to win their first WNBA title together.

This win enabled her into an elite club being only the 7th player ever to win a WNBA title, NCAA title, as well as an Olympic gold medal. Her successes led to her being nicknamed as the White Mamba, which was a term coined by the late Kobe Bryant. So far, Diana has been able to win four Olympic Basketball gold medals representing the U.S.

Throughout her career, Diana has established herself to be the best be it at a club level or for the international team. Even after she retires, Diana is going to be remembered as one of the greatest female basketball players.

Diana Taurasi got married to Penny Taylor in 2017 after being together for several years. Taylor would welcome their first child together named Leo Michael Taurasi-Taylor in 2018.

As of 2022, Diana Taurasi has an estimated net worth of $2 million. Diana earned a vast chunk of that money during her successful basketball career playing for Pheonix Mercury. Her salary is around $500,000 per year.

Jermaine O’Neal Net Worth: How Rich is the Retired NBA Player?

Bryson DeChambeau Net Worth: How Rich is the Golfer Actually?