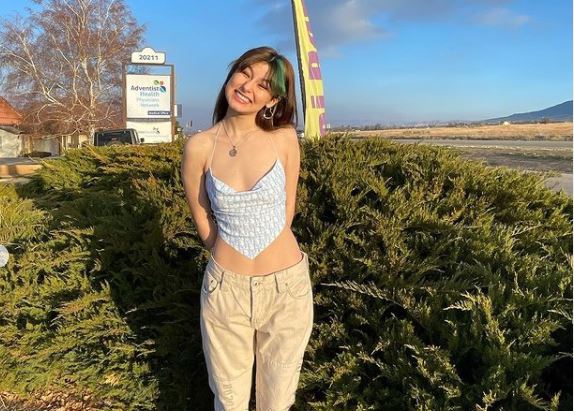 Dez Machado is a 18-years-old YouTube and social media star. She is best known for making videos on YouTube which are mainly aimed at other young girls. She mainly focuses on school-related vlogs, try-on, and makeup hauls on her videos. Dez currently has 1.18 million subscribers on her self-titled YouTube channel. As of 2022, Dez Machado net worth is estimated to be $300 thousand.

Dez Machado was born Desiree Machado on the 28th of May, 2004 in California, United States. She belongs to the white Mexican and Japanese ethnicity. In one of her videos, she has mentioned that her biological father is Japanese. Dez was raised by her mother, Marianne, and step-father, Lucas. Her mother and stepfather carry the same profession as photographer and cinematographer.

Dez is grown up with three sisters. Her elder sister named Alexis Marie has appeared on her YouTube channel. Alexis also has her own self-titled YouTube channel named “Alexis Marie”. Her other two young sisters named are Victoria and Rachel.

Dez has included all her family members in one of her videos titled “Each of my family members picked out my outfits for a week”. Machado has not shared enough information regarding her education. However, she has mentioned that she loves biology and hates math.

Initially, she thought that she could use YouTube for watching music videos only. However, after getting used to the YouTube platform, she thought of uploading her own videos. She started uploading videos in December 2016. Her first vlog was titled “Mall Vlog + Haul”. Dez also had a secondary channel where she began uploading vlog videos in August 2016. However, after some time, she left the secondary channel and started to upload regularly on her primary channel.

Dez uploaded the video titled “The first day of 8th-grade grwm/vlog 2017” on August 18, 2017. The video received over 1 million views in a quick time. Meanwhile, it became her first most popular video on her YouTube channel. Recently, Dez has been uploading videos on her channel regularly.

She has most recently made a video on the title “I dressed up as a different zodiac sign every day for a week to school… (part one)”. The video was uploaded on her channel on July 30, 2021.

The 18-year old social media star currently stands at a height of 5 feet 5 inches or 165 cm tall and weighs around 52 kg or 115 pounds. Her body measurements are not available at the moment. Likewise, her hair color and eye color are both dark brown.

Dez Machado is believed to be single at present time. She has previously dated a boy named Renato from her school. Dez introduced her boyfriend to her fans through a video on January 27, 2019. The video was titled “Turning my boyfriend into a bratz doll LOl gone wrong”.

Her then-boyfriend has also featured in some of her other videos like “My boyfriend and I matched outfits to school for a week”, and “I and my boyfriend remade cringy couple TikToks”. Some times back, she was criticized for uttering the n-word in her videos. However, later she apologized to her fans through a video where she further clarified that she was using the words while doing a lip-sync to a song that contained the n-word.

Kayla Nicole Net Worth: How Rich is Travis Kelce’s Girlfriend?