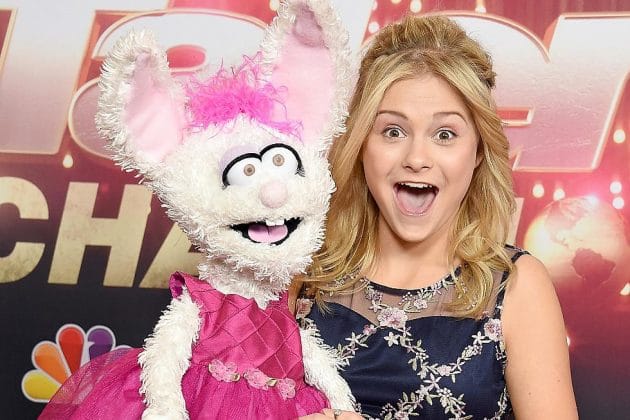 Darci Lynne recently returned back on America’s Got Talent 2021 where she performed “Let the Good Times Roll” on August 11, 2021.

Darci Lynne was born on the 12th of October, 2004 in Oklahoma City, Oklahoma, United States. She was born to her parents, Clarke and Misty Farmer. She grew up with three brothers named; Nick, Dalton, and Nate. Darci had an early interest in singing but due to her shyness, she was afraid to show her talent in front of an audience.

Lynne’s parents motivated her to participate in the 2014 International Cinderella Scholarship Program. She was able to overcome her shyness during the program, and eventually, she came up with the title International Mini Miss. In the competition, she met a young ventriloquist, Laryssa Bonacquisti, who became an inspiration to her.

Lynne got a puppet from her parents on her 10th birthday, after she insisted that it would help her to overcome her shyness. She started practicing with a puppet idolizing past America’s Got Talent winner, Terry Fator.

You May Also Like:   Jen Shah Net Worth: How Rich is RHOSLC Star Actually?

Lynne soon participated at Edmond’s Got Talent in 2016, and in the end, she came out holding the first prize. She also finished at first place at Oklahoma Kids, and Oklahoma’s Got Talent.

Darci came to the notice after she competed on the 12th season of NBC’s talent competition show “America’s Got Talent”. In the first episode of the show, she entered with a puppet which she named, Petunia, and performed “Summertime”.

She received the Golden Buzzer from the judge, Mel B, which made her straight entry to the quarterfinals. Her performance video became the most viewed video on the show’s history, and it was the fourth in the top 10 trending videos of 2017.

At the finale of the talent competition, she fulfilled her dream of performing with her idol, Terry Fator on the stage. She eventually was named the winner of the 12th season, and with the win, she received the $1 million prize and her own show at Planet Hollywood in Las Vegas.

Lynne returned back as a contestant in “America’s Got Talent: The Champions” in January 2019. She made it to the top 3 and was voted out. However, she made a wild card entry and reached the Finals. In the end, she was announced as a runner-up of the show, and the magician, Shin Lim was named the winner of that season.

Darci has most recently performed on American’s Got Talent 2021. Both the audiences and the judges were happy and mesmerized looking at her performing on the stage again. She also tweeted on Twitter “Oscar and I left the good times to roll tonight on @AGT! It felt So good to be back on the stage that started it all, so grateful #AGT.”.

Darci Lynne is believed to be single right now. She has not yet revealed her true relationship status yet. Lynne has likewise given any hint on being in a relationship with anyone through her Instagram and Twitter accounts. Lynne currently has 879K followers on Instagram.

As of 2022, Darci Lynne’s personal wealth is estimated to be around $10 million. She started touring the United States after she won AGT season 12 in 2017. To date, she has performed on various tours and has made an appearance on numerous TV shows.

Danny Koker Net Worth: How Rich is the Counting Cars Star Actually?