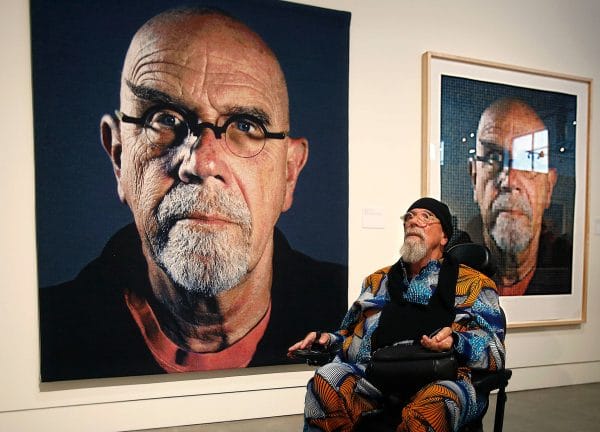 Chuck Close was an American painter, photographer, and visual artist. He is known for making distinctive and monumental portraits of himself and others. Chuck Close net worth before his death is estimated to be around $25 million.

Chuck was born on July 5, 1940, in Monroe, Washington to parents Leslie Durward Close and Mildred Wagner Close. He struggled as a child in school due to undiagnosed dyslexia but completed his bachelor’s degree at the University of Washington. After that, he studied at Yale University where he received his MFA in 1964.

Close then went to the Academy of Fine Arts Vienna and upon his return to the US, he worked as an art teacher at the University of Massachusetts.

Chuck is known for his contribution to portrait through a variety of drawing and painting techniques using ink, graphite, pastel, finger painting, woodcuts, silkscreens, Polaroid photographs, and Conte crayon.

His first solo show, in 1967, was at the University of Massachusetts where he was teaching at that time. His exhibition captured the negative attention by the University because it contained male nudity. The case even went to court with American Civil Liberties Union favoring on the artist’s behalf. He decided to leave Boston and then move to New York City.

You May Also Like:   Irwin Winkler Net Worth: How Rich Is the Producer in 2022?

Chuck’s best work is a self-portrait in which he starts back at the camera through plastic black-rimmed glasses along with messy hair and a cigarette with smoke rising from his mouth. His other works including portraits of painter Joe Zucker, sculptor Richard Serra, and composer Philip Glass were also monumental.

In 1999, his portrait of Cindy Sherman sold for $1.2 million while a painting called ‘John’ was sold at Sotheby’s to the Broad Art Foundation for a massive $4.8 million.

Despite the huge success, he also faced allegations of sexual harassment at the height of the MeToo movement. In 2017, he was accused by two women of having sexually harassed them when they came to his studio to pose as models. A year later, four more women alleged he harassed them. In response to that, he issued an apology to The New York Times saying “If I embarrassed anyone or made them feel uncomfortable, I am truly sorry, I didn’t mean to”.

Regarding his marriage life, he first married Leslie Rose with whom he had two daughters. They divorced in 2011 and then married artist Sienna Shields in 2013. They also divorced later in 2017.

Close’s work can be found in institutions such as the Metropolitan Museum of Art, the Whitney, the MoMA in New York, the National Gallery of Art in Washington, and the J. Paul Getty Museum in Los Angeles.

Seraphina Watts Net Worth: How Rich is Charlie Watts’ Daughter?

Joanne Whalley Net Worth: How Rich is Val Kilmer’s Ex-Wife?