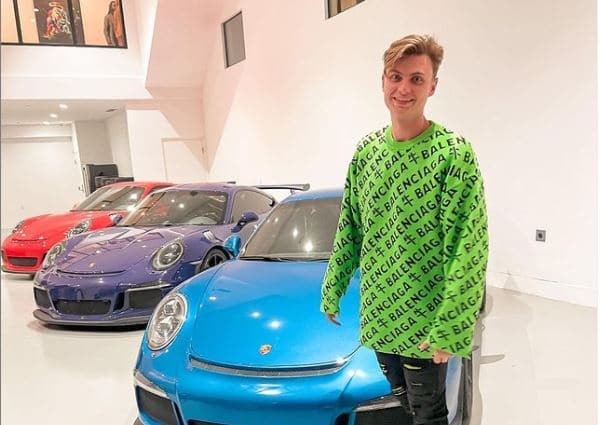 Carter Sharer is a 28 years old YouTube star, who is best known for posting vlogs, challenges, pranks, and other entertaining videos on his self-titled YouTube channel. His YouTube channel currently has 8.34 million subscribers. As of 2022, Carter Sharer net worth is estimated to be roughly $8.5 million.

Carter Sharer was born on the 21st of October, 1993 in Oakton, Virginia, United States. He has not provided detailed information regarding his past life and parents. However, we got to know that his father is a lawyer, and his mother is an artist who creates impressive artworks using oil paints.

Carter grew up with his two siblings. His brother, Stephen, and his sister, Grace, both are YouTube stars. Regarding his education detail, he has studied at Oakton High School, from where he held his graduation degree in 2012.

Later, he joined Carnegie Mellon University. He earned a Bachelor of Science degree from the University with majoring in mechatronics, robotics, and automation engineering.

Sharer has been an innovative kid from the beginning. He was gifted a welder for his birthday when he was 11. Then, in a quick time, he became a self-trained proficient welder. He has even come up with his brilliant ideas and turned his ideas making engine-powered devices like go-carts, and hovercraft.

Carter started his self-titled YouTube channel on 24th September 2009. He made his first video titled “My First Vlog!! (Carter Sharer)”, and uploaded it on November 9, 2017. To date, his first video has been viewed by over 1.5 million people.

Following that, he uploaded his second video titled “Ninja Weapon Soda Drop Test!!” on November 19, 2017. The video has garnered more than 8.2 million views so far. In the video, he has featured his brother, Stephen, and both did an experiment by exploding soda bottles, and later dropping them on Ninja Weapons.

Sharer was becoming popular on YouTube from his entertaining videos. That encouraged him to make more videos, and this time, he also focused on making vlogs. Sharer uploaded a video titled “RC Car Drives on Pool!” on December 22, 2017. The video was reached out to many people in a short time, and after the video, his subscribers increased in large numbers.

Carter’s other videos which have made him popular on YouTube are titled “Last to Breathe Wins $10,000”, and “Last To Leave Car Wins $10,000”. Both of the videos have received over 20 million views. Carter is still active on YouTube, and he delivers entertaining content at a regular interval time.

Carter Sharer was in a relationship with fellow YouTube star, Lizzy Capri. She was making videos earlier under the name Lizzy Sharer. Lizzy had started posting YouTube videos in 2017. She used to make most of the videos with her ex-boyfriend, Carter Shearer.

The pair dated for seven years and announced their separation news in 2019. Carter and Lizzy are still good friends, and they often make videos together for YouTube.

As of 2022, Carter Sharer’s personal wealth is estimated to be around $8.5 million. He has gathered the vast chunk of money from making videos on YouTube. Carter makes an estimated annual revenue of around $7.3 million from YouTube.