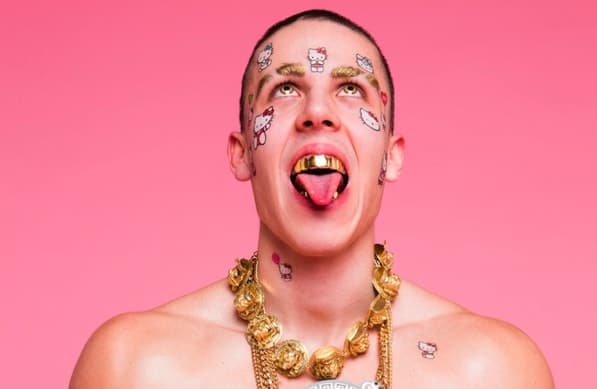 Candy Ken is a famous Austrian rapper, model, and TikTok star. Ken is mostly recognized for his gender blending masculine appearance along with feminine pop culture. He is likewise quite popular for his TikTok videos. At the start of 2022, Candy Ken’s estimated net worth amount is reported around $2 million.

30 years old, Candy Ken was born Jakob Kasimir Hellrigl on 27th July 1992 in Austria. He spent his childhood days growing up in Bregenz, Austria. In 2012, he moved to Berlin to study photography and film design at Lette-Verein College. However, he was unable to complete his study. In 2014, he dropped the college. Later, he studied at Wenatchee High School based in Washington. He attended the school for a year.

While he was studying at Wenatchee, he made two female friends who later became his best buddies. Ken mentioned the two ladies were the ones, from whom he got inspired to began his music career. Ken went on to invent a new gender-bending persona for himself, getting inspired by Japanese Kawaii culture and barbie dolls. He started wearing pink clothes as his unique dress style.

Candy Ken Net Worth and Career

In 2014, he released a video series Welcome to Candy Land on YouTube. It was his self-directorial work, produced by Let’s Go Radio. After some time, the video was made as a short movie Welcome to Candy land. It earned him an award at the Austrian short film festival in 2015. The same year, he released his second EP titled Candy Ken Paradise and third EP “Daddy 69”.

After taking few steps toward his music career, Ken released his solo career album titled “Real Talk” in June 2016. He was inspired by the rapper Riff Raff to make that album.

Ken has also worked as a model, besides working behind the camera. In 2015, the creative designer Nicola Formichetti saw his picture on Instagram. She was quite impressed with him. Formichetti, later introduced him to Terry Richardson who agreed to take him as a model for the magazine “Man about Town”. He even went on full frontal nude for the photoshoot. After that, he modeled for other magazines like VMAN, Paper, Vogue, and Dazed.

Candy has also become famous in TikTok. He is in fact followed by 10.5 million followers on TikTok. To date, his videos are liked by more than 350 million times.

Many people have a doubt about his true sexuality. Ken is not gay, he is very straight as other men. Few reports claimed that Ken is dating a girl named Baby J. His rumored girlfriend is also a TikTok Star. She is often seen sharing the pictures with Candy on her social media profiles. It seems that both are having a great time with each other.

The famous rapper and TikTok star, Candy Ken net worth is estimated to be around $2 million as of 2022. He is also earning a huge amount from advertisements and sponsorship on TikTok. According to our estimate, he is earning between $1,309 to $2,182 per post from just a sponsorship.