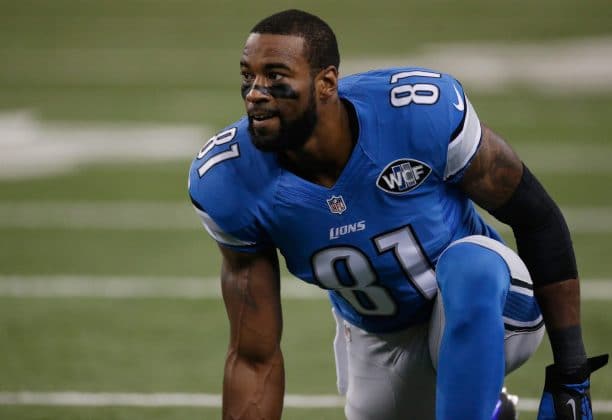 Calvin Johnson is a 36 years old retired American football wide receiver. He is best known for playing in the National Football League (NFL) with the Detroit Lions for nine seasons. Johnson is considered one of the best and greatest wide receivers of all time. As of 2022, Calvin Johnson net worth is estimated to be around $45 million.

He was inducted into the Pro Football Hall of Fame on August 8, 2021, where he thanked Detroit fans for showing their support to him throughout his legendary football career.

Calvin Johnson was born on the 29th of September, 1985 in Newnan, Georgia. He was born to his parents, Jason, and Arica Harris. For his study, he joined Sandy Creek High School. While studying in high school, he was a baseball standout and a letterman in football.

Johnson was ranked as the top 10 wide receivers, and the top 100 players in the nation in his junior year. After a successful junior year, he played for the Georgia Tech Yellow Jackets football under the head coach, Chan Gailey. His great game with the team made him the greatest Georgia Tech player of all time.

You May Also Like:   Miesha Tate Net Worth: How Rich Is the UFC Fighter in 2022?

Calvin came out as the best athlete after he finished his senior season at Georgia Tech. He was picked up by the Detroit Lions in the 2007 NFL Draft in the first round. Johnson signed a six-year contract deal with Lions on August 3, 2007.

He made his impressive NFL debut on September 9, 2007, where he caught 4 passes for 70 yards. Johnson kept his good form and helped the Lions get victory over the Atlanta Falcons at the Georgia Dome on September 7, 2008. In the game, he led the team in overall receptions and yards.

Johnson standout in the 2011 season as he had his best statistical records in that season. In the season, he had 1681 receiving yards with 16 touchdowns. In the season, he also helped the Lions to get victory over Dallas Cowboys with 34-30. His contract with Lions was extended for eight-year on March 14, 2012. Johnson excelled in the 2014 season as he had a strong opening of the season with 7 receptions for 164 yards and 2 touchdowns.

On November 1, 2015, he became the fastest player ever to reach 11,000 receiving yards in the history of the NFL. He set the record in his 127th game. Johnson finished the 2015 season by making 88 receptions for 9 touchdowns and 1214 yards. His 1214 yards are the most ever made by players in the final season in NFL. Johnson made an announcement of his retirement from NFL on March 8, 2016.

You May Also Like:   Katie Ledecky Net Worth: How Rich is the Swimmer Actually in 2022?

Calvin Johnson is a married man who tied the knot with his long-time girlfriend, Brittney McNorton in June 2016. Before getting married, they were engaged in March 2015. Prior to dating Brittney, he was dating someone else with whom he also had a son.

Though, he has not shared enough information on his past love affairs. As of now, Johnson is spending a splendid moment with his wife Brittney in Atlanta.

As of 2022, Calvin Johnson’s personal wealth is speculated to be around $45 million. As a wide receiver, he was getting an annual salary of $22.6 million from Detroit Lions. Johnson was signed by the Detroit Lions for $64 million on August 3, 2007, which made him the highest-paid player signed in Lions history.

Likewise, his contract was extended by Lions for $132 million on March 14, 2012. With that, he became the highest-paid wide receiver in the league.

PJ Washington Net Worth: How Rich is the NBA Player Actually?

Edgerrin James Net Worth: How Rich is the Legendary Football Player?