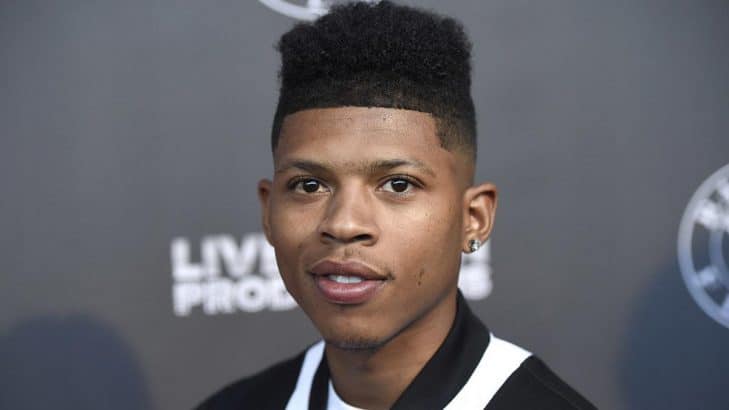 Bryshere Gray is a 28 years old American actor and rapper. He is best known for his outstanding performance as Hakeen Lyon in Fox’s musical drama TV series “Empire”. As of 2022, Bryshere Gray net worth is summed up to be around $2 million.

Bryshere Gray has recently proven guilty to felony aggravated assault, due to which, he was sentenced to 10 days in Arizona’s county jail plus 3 years probation for attacking his wife in July 2020.

Bryshere Gray was born on the 28th of November, 1993 in Philadelphia, Pennsylvania, United States. He was raised by his mother Andria Mayberry, who became pregnant at teenage. He has a sister, Brianna. Gray suffered from ADHD when he was 5 years of age. Earlier, he was more interested in sports. He even spent more time playing football while attending Overbrook High School.

Gray shifted his interest from football to music when he reached 16 years of age and got injured while he was playing. He used to perform in the street, and earn some money to help his mother to fulfill financial needs. Gray also worked at Pizza Hut for some time. while working there, he used to spent more time making music. Gray was in fact fired from his job as he was found writing music during his work time.

Bryshere later used all the money which he earned from working at Pizza Hut, and made his first music video. In his earlier days, he used to perform at various music festivals in Philadelphia, like The Roots’ Picnic Festival, Jay-Z’s Made in America Festival, and Power 99FM’s Powerhouse concert. Moreover, he has also opened acts for known rappers, Fabulous and 2 Chainz.

Gray came up with his debut song, Respect, and released it in 2013. The song helped him to gain early recognition. Gray later received more fame when he was selected for the role of Hakeem Lyon on Fox’s musical drama series “Empire”. He portrayed the character for five years until the series ended on April 21, 2020.

Bryshere later appeared as Michael Bivins in the biographical miniseries “The New Edition Story” in 2017. That same year, he made an appearance in the music reality series “Lip Sync Battle”. In 2018, he made an appearance as Tyrell in the dance movie “Honey: Rise Up and Dance”. Gray’s recent performance came as Kholi Styles in the drama thriller movie “Canal Street”.

Bryshere Gray is married to a lady named, Candice Jimdar. Last year in July 2020, his wife accused him of assaulting her for several hours. Somehow, she managed to escape from his house, called 911. Eventually, the police arrived at their house and successfully rescued Gray’s wife, Candice. The police found Candice with several injuries on her body, and she was immediately taken to the nearby hospital.

You May Also Like:   Ed Asner Net Worth: How Rich was the Legendary Actor Actually?

After police went through an investigation, they found that Gray charged on her after she found him messaging other women on his phone. The verbal fight later turned into a physical, and Gray later punched her more than 100 times. He even choked her and tried to harm her with a knife. However, Gray went on denying his wife’s statement, and finally, he was taken into custody and sent to Maricopa County Jail.

Recently, on May 24, 2021, the verdict on Gray’s domestic violence has arrived. He was found guilty on the case, and as a result, he was sent for 10 days in the County Jail of Arizona with 3 years probation period.

As of 2022, Bryshere Gray’s net worth is estimated to be around $2 million. His recent domestic violence case would surely make an impact on his career. Though, he would surely get back to his acting and singing work, after some months, and add some more money to his current net worth figure.

Paul Mooney Net Worth: How Rich was the Comedian Actually?