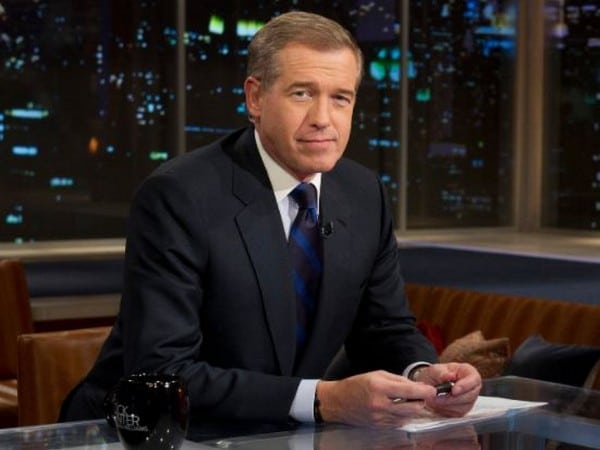 Brian Williams is a 63 years old American journalist. He is best known as a host of MSNBC’s news and politics TV program “The 11th Hour with Brian Williams”. Brian previously served as a chief anchor of “NBC Nightly News”. Williams announced on Tuesday night, November 9, that he would be leaving MSNBC and NBC News at the end of this year. As of 2022, Brian Williams net worth is estimated to be around $50 million.

Brian Williams was born on the 5th of May, 1959 in Ridgewood, New Jersey, United States. He was born to his parents, Gordon Lewis Williams and Dorothy May. His father, Gordon used to serve as executive vice president of the National Retail Merchants Association. Likewise, his mom, Dorothy was an amateur stage actress. He grew up in a boisterous catholic home along with four elder siblings.

Regarding his education detail, he has studied at the Mater Dei High School. While he was in high school, he served as a volunteer firefighter for 3 years at the Middletown Township Fire Department. At the same time, he was also responsible as an editorial editor for the school newspaper.

After completing high school graduation, he joined Brookdale Community College. He was later transferred to the Catholic University of America, and George Washington University. However, he didn’t obtain a University degree. He ultimately joined the administration of President Jimmy Carter, where he worked as an intern.

You May Also Like:   Giada De Laurentiis Net Worth: How Rich is the Chef Actually?

Williams started his broadcasting career in 1981 by joining the CBS-affiliated TV station, KOAM-TV. He expanded his work experience by working at CBS-affiliated other TV stations, WTTG and CAU. In 1987, he started broadcasting at WCBS. He became associated with NBC News in 1993, where he served as an anchor of the national Weekend Nightly News. In 1996, he was appointed as a managing director and an anchor of the news program “The News with Brian Williams”, which was broadcast on CNBC and MSNBC.

Brian began serving as an anchor of NBC Nightly News on December 2, 2004. He earned wide appreciation for covering the news of Hurricane Katrina. In the particular news coverage story, he showed his anger and frustration at the government’s failure to respond and act quickly to provide relief for the victims. Williams was awarded a 12 News & Documentary Emmy Awards for anchoring NBC Nightly News.

Williams was announced as an anchor of a news magazine program, “Rock Center with Brian Williams” on October 4, 2011. The news program eventually started premiering on October 31, 2011. However, the news program was canceled after two years on May 10, 2013, due to its low ratings. Williams started his new on-air journey as a chief anchor of MSNBC in September 2015. He has covered many major news events for MSNBC including the terrorist attacks in Paris, Brussels, San Bernardino, and Nice.

Brian is currently serving as an anchor of the nightly news and politics TV program “The 11th Hour with Brian Williams”. He has recently announced that he is leaving NBC News and MSNBC at the end of this year. He said in a statement “This is the end of a chapter and the beginning of another. There are many things I want to do, and I’ll pop up again somewhere.” Williams further added in a statement that he is ready to begin a new chapter in life after his contract with the company will expire in next month.

Brian Williams is married to a lady named Jane Gillan Stoddard. He tied the knot with her on June 7, 1986, at the First Presbyterian Church. The pair shares two kids together; a daughter and a son. Their daughter, Allison Williams is an actress who has appeared in the HBO series “Girls”. Likewise, their son, Doug works as a late-night anchor on SportsNet New York.

As of 2022, Brian Williams’ personal wealth is estimated to be around $50 million. He is reportedly earning a salary of $6 million per year through serving at MSNBC. Though, his salary was around $13 per year in 2014, which was reduced to $6 million per year after he fell into a scandal and relegation to MSNBC.

Monica Lewinsky Net Worth: How Rich is the Activist Actually in 2022?