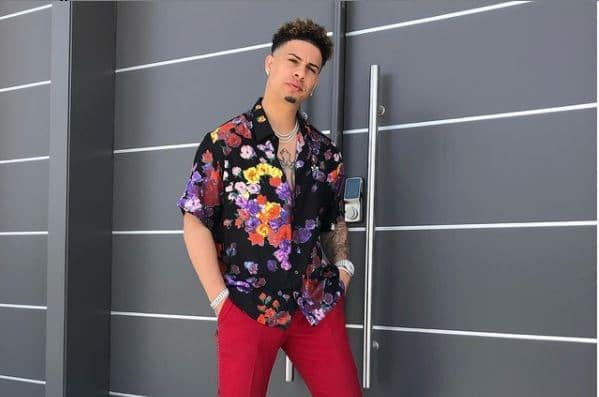 Austin McBroom is an Instagram and YouTube star. He is also a former NCAA basketball guard, who played for Saint Louis University men’s basketball team. Likewise, Austin is known for his collaborative YouTube channel, The ACE Family, which features his wife Catherine Paiz, and family. As of 2022, Austin McBroom net worth is estimated to be roughly $2 million.

Austin has recently had a violent brawl with a TikTok star, Bryce Hall at the WeHo press conference. The two social media stars showed up at the conference to promote their upcoming fight on June 12 at the Fred Segal store.

Austin McBroom was born on 20th May 1992 in Los Angeles, California, United States. He has not shared enough information on his early life and parents. Though, we got to know that he has a brother named Landon McBroom, who is also a YouTube star.

Austin has earlier been more interested in sports. While studying at Campbell Hall School, he was more into playing football, baseball, and basketball. During his senior year, he scored average points of 25 in each game. After that, he joined Saint Louis University. Austin played for a University men’s basketball team during the 2011-2012 season.

After the end of his college years, he turned his way and became more interested in earning fame in the social media world. Austin currently has 6.5 million followers on Instagram. On January 11, 2016, he started a YouTube channel called The ACE Family, along with his better half, Catherine Paiz.

You May Also Like:   Nickmercs Net Worth: How Rich is the Twitch Streamer Actually?

Austin and Catherine made their first video on July 28, 2016, with the title “The ACE Family Q&A”. Their first video has garnered over 12 million YouTube views to date. Austin went on making more videos with Catherine, and the video surprisingly started getting a lot of views. Austin also features three kids in his videos.

McBroom is still making a lot of videos with his family for YouTube and keeping people entertained. The ACE Family made their recent video on May 14, 2021, with the title “We Caught a UFO Flying Over Our House”. The video received over a million views in just six days.

It’s known to all now that Austin is married to Catherine Paiz, with whom, he makes a lot of videos on YouTube. The pair shares three kids; 2 daughters Elle and Alaia, and a son, Steel. On April 29, 2021, the couple announced Catherine is pregnant with their fourth baby. The happy family is shifting to their new place in Miami, which they revealed through their video on May 1, 2021.

Austin is getting a lot of attention recently for his ongoing feud with a TikTok Star, Bryce Hall. In December 2020, Austin challenged Bryce to fight with him. Though Bryce didn’t respond to him for a while, in March 2021, he came up with all screenshot messages between him and Austin and made it public on Twitter.

On March 15, he shared an image that highlighted a $5 million amount and mentioned that he is finally ready to fight with Austin. The fight is scheduled to be held in West Hollywood on June 12. Two recently met at a WeHo conference before their fight, and at the conference, both had a few hands-on each other.

As of 2022, Austin McBroom’s personal wealth is estimated to be roughly $2 million. Through their YouTube channel, The ACE Family, Austin, and Catherine earn around $7,000 in a day, which makes their annual earnings of around $2.5 million.

Jena Frumes Net Worth: How Rich is Jason Derulo’s Girlfriend?