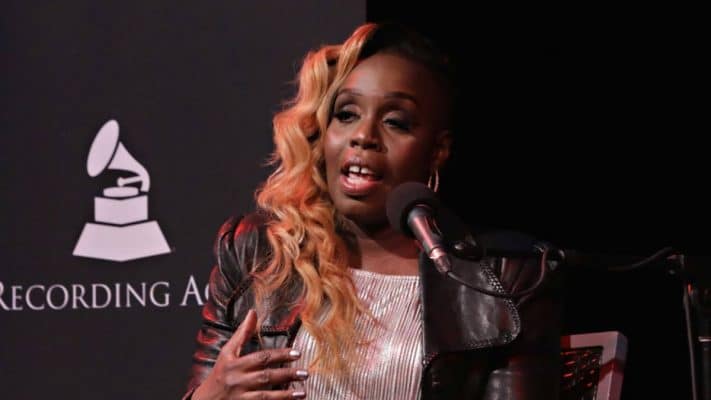 Andrea Monica Martin was an American singer and songwriter. She was focused on the R&B genre and wrote songs for some of the most well-known artists of her time including creating the song called Before You Walked Out of My Life for the artist named Monica which reached No.1 in the Billboard Hot R&B Charts. Andrea Martin net worth at the time of her death is estimated to be around $700,000.

As a young kid, Andrea saw Michael Jackson perform in front of the television which was a big inspiration for her.  She mentions that it was at the age of 6 that she had already made up her mind to be a singer. It is because of this interest in music that her parents sent her to Fiorello H. LaGuardia High School of Music & Art and Performing Arts from where she graduated in 1990.

Because of this background, Andrea was writing songs from a young age and even was a regular performer at the Apollo during the Amateur Night that happened there. She was being paid for her songwriting skills by the time she reached the age of 18 having received a publishing deal by this time.

Andrea Martin Net Worth and Career

Along with her former classmate named Ivan Matias, the two started writing several songs among which their big breakthrough came with the success of You’re the One which managed to be the Billboard No. 1 R&B Single.

You May Also Like:   Top 20 Richest American Idol Contestants Ranked by Their Net Worth 2022

Andrea was having success as a songwriter but she would decide to make a switch from songwriting to performing songs after her manager suggested her back in 1996. She felt it was the right time for this switch as she was well connected in the industry and had a great voice too.

Andrea started to work on her debut album called The Best of Me which included a total of 12 songs. This became a big hit as many of the songs were made based on her own life and the stories behind it. Among the songs in the album Let Me Return the Favor and Share the Love were big hits.

Over the years, Andrea was able to work with several star artists including Monica, Deborah Cox, and Shanice. For the artist named Toni Braxton, Andrea along with her writing partner Ivan was able to produce the hit called I Love Me Some Him.

Furthermore, they were also behind creating the song called Wish I Didn’t Miss You for Angie Stone as well as Before You Walk Out of My Life for the artist Monica. During her career as a songwriter, she also worked with lesser-known stars such as Paloma Faith and Jennifer Hudson to help them create successful singles.

Many knew Andrea simply as Annie. She expressed in an interview on her success about how it stems from the fact that music is her true passion and all the songs that she has written are straight from her heart which is why so many of them have been able to do so well over the years.

On September 27, 2021, Andrea passed away at the early age of 49 which was mentioned via her Instagram story through her close family and friends who were seeking privacy regarding this loss.

As of 2022, Andrea Martin had an estimated net worth of $700,000. Her early success as a songwriter and her later works as a singer had led to her amassing such a net worth.

Ashanti Net Worth: How Rich is the Singer Actually in 2022?

Melanie C Net Worth: How Rich is the Spice Girls Star Actually?