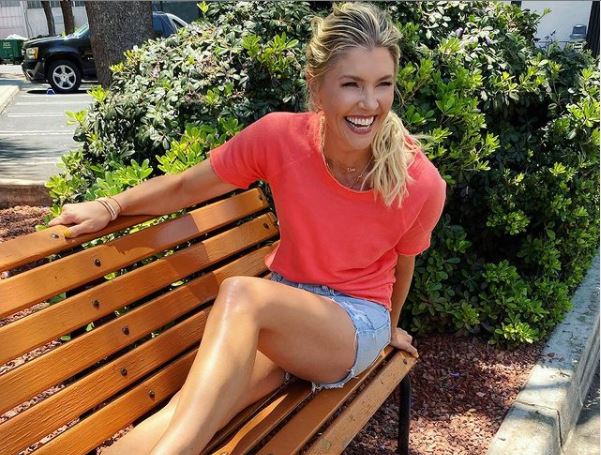 Amanda Kloots is a 40 years old American TV personality, dancer, and fitness instructor. She is best known as a co-host of the daytime talk show “The Talk”. As of 2022, Amanda Kloots net worth is estimated to be around $1 million.

Kloots is recently finalized as one of the contestants who would be competing on Season 30 of the dance reality show “Dancing with the Star”.

Amanda Kloots was born on the 19th of March, 1982 in Canton, Ohio, United States. She has not provided brief information regarding her past life, and parents. However, through sources, we got to know that her mom’s name is Maureen, and she has one brother named Todd. She has other four siblings.

Kloots was interested in dancing from the beginning. She even attended professional ballet dancing classes when she was 10. She has also studied performing arts. Likewise, Kloots used to take part in various school plays. She has studied at the GlenOak High School based in Plain Township, Ohio.

Amanda initiated her career by being a part of several musicals on Broadway, which include Follies, Good Vibrations, Young Frankenstein, and Bullets Over Broadway. She has also performed as a member of the dance company, the Rockettes.

Kloots went on to launch a digital fitness brand in 2020. Through the brand, she shared an exercise video that was taught by herself. She showed up as a guest co-host for the first time on the CBS daytime talk show “The Talk” in 2020. She was made a permanent co-host of the show in January 2021.

Amanda is quite excited to get back to dancing as she has not danced for seven years. While talking to reporters, she said that It is the right time to join the show. She further added, “I want to find that part of me again. It’s going to feel so good. It’ll be so therapeutic and cathartic for me. I’m looking at it like that. I want to find myself again.”

Amanda Kloots was married to late Canadian actor, Nick Cordero. She met him the first time in 2014 while they were performing in the Broadway show called, Bullets Over Broadway. Then, they dated for several years. The pair exchanged their wedding vows on 3rd September 2017.

Kloots shared a son with Nick, named Elvis Eduardo, who was born on June 10, 2019. She lost her husband, Nick Cordero on July 5, 2020. Nick died during the treatment of COVID-19. He fought with COVID-19 for over 90 days while he was admitted to the hospital of Los Angeles.

In July 2021, she started dating someone, due to which she received a negative comment on Instagram. She didn’t let the negative comments get her down, and she immediately called out a user who made a comment, “Dating already. Wow that was fast!”.

Kloots even shared the comment on her Instagram story, and talking about the comment, she told her co-hosts that “It’s quite terrifying and really out of your element, and it’s just hard. It is hard.”

As of 2022, Amanda Kloots’ personal wealth is estimated to be around $1 million. She must be getting a hefty sum from being one of the cast members on Dancing with the Stars. However, she has not provided any detail on her exact salary from the dance reality show yet.