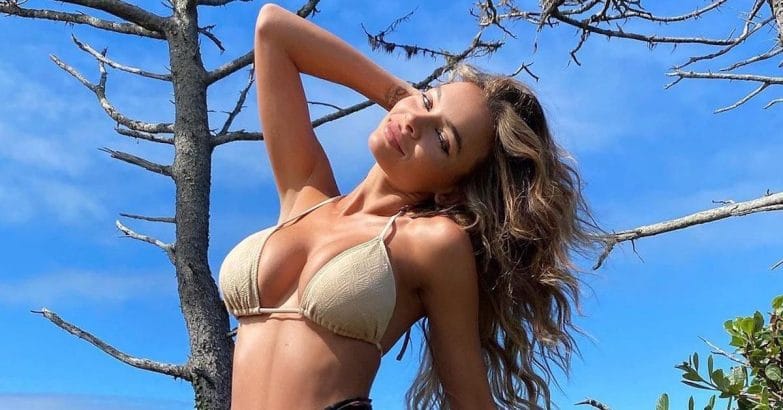 Alyssa Scott is an American model, who has appeared on MTV’s show “Wild ‘n Out”. She is recently in the limelight for her linkup rumor with the Wild ‘n Out host, Nick Cannon. Alyssa is presently 34 weeks old pregnant, and rumor is going on that Cannon could be her unborn child’s father. As a 2022 Alyssa Scott net worth is around $1 million.

Alyssa Scott was born on 12th October 1993 in Austin, Texas, United States. She was born to parents, Alan Scott and Lisa Marie Kalender. Her father, Alan Scott is a businessman, and her mom, Lisa is a homemaker. She has an elder brother named Alexander Scott. According to sources, her brother Alexander is a dirt-bike racer.

Alyssa completed her school education at a private local school. However, we are yet to get more information on her academic background. She started her career working as a freelance model. Alyssa has also been featured as a model on some fashion brands. Soon, she started posting her modeling pictures on social media sites like Instagram.

After uploading eye-captivating pictures on Instagram, she started getting more modeling offers. She has even modeled for renowned brands like Ignite and Fashion Nova. Likewise, she has modeled for various swimsuit brands. According to some sources, she has also worked as a model on MTV’s popular comedy sketch show, Wild N’ Out.

Alyssa Scott has recently grabbed people’s attention through her latest Instagram post on May 20, 2021. She actually shared a picture on Instagram showing her baby bump with the caption as Zen S Cannon. As soon as she shared a picture, her followers started asking her many questions. One of her followers asked her if Nick Cannon is her unborn kid’s dad? In response, she replied with three smiley heart emojis. Likewise, when one of her followers praised the chemistry between her and Nick Cannon, she replied with Thank You.

Alyssa and Nick Cannon’s love rumor started when they were seen together in October 2020 on Malibu hotspot, Nobu. Nick was taking her on a date on the occasion of her birthday. Cannon was seen putting his arm around her, and after the date night was over, both were seen together exiting from the oceanfront restaurant.

Alyssa has neither confirmed nor denied Nick being her unborn kid’s father. If the rumor turns out to be true, it would be the seventh child for Nick Cannon, and four kids this year from different women. Nick is also expecting twins from Abby De La Rosa.

Alyssa Scott might have earned a considerable amount from her modeling career. However, she has not shared her exact net worth figure yet. According to our estimate, her net worth must be around $1 million. She is also making a hefty amount from endorsing various beauty and fashion-related products through promoting on Instagram.

Arrogant Tae Net Worth: How Rich is the Instagram Star Actually?