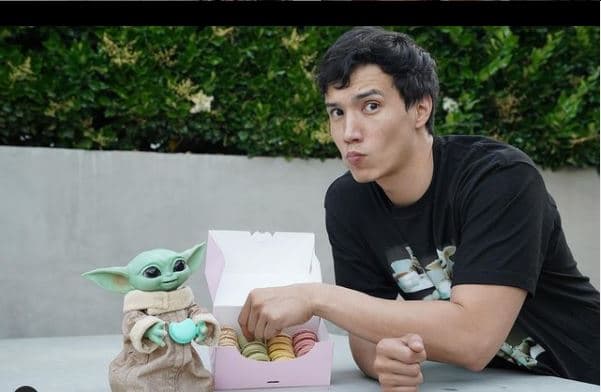 Aaron Burriss is a 33 years old Philippines-born American YouTube star. He is best known for running a YouTube channel named “Lazyron Studios”. Through his YouTube channel, he makes video blogs, challenge videos, parodies, and sketches. Aaron is also popular as Aaron Wassabi. As of 2022, Aaron Burriss net worth is estimated to be around $2 million.

Aaron Burriss was born on the 4th of February, 1989 in Clark Air Base Hospital, Philippines. He was born to parents, Adam and Maribel Burriss. Aaron was about a year old when his parents shifted their place to Montana. After few years, they moved to Lexington, Kentucky, and finally, they settled down in North Carolina.

He has two brothers; Alex and Andrew, and a sister, Mariah. Both of his brothers are YouTube stars. One of his brothers, Alex is popular for running a YouTube channel called “Wassabi”.

Regarding his education detail, he has studied at a private school based in Kentucky. After his family moved to North Carolina, he joined the University of North Carolina.

Burriss created his YouTube channel in 2013 and uploaded his first video titled “How to Take Care of Your Dog” on March 30, 2013. In the initial days, he used to make mostly dog videos. As his channel grew, he started making prank videos and daily vlogs.

Aaron has garnered a ton of love from his social media fans. People find his videos really entertaining, and as a result, they are showering immense love towards him. Out of his many videos, some of his popular videos are “I Made A Wack-A-Mole Machine For My Dogs”, “Who Knows Me Better? Mom Vs Bro”, “His Tooth Is Stuck In His Tongue!!”,  and “Moving Is Stressful”.

As of now, he is available on YouTube by his own name. Looks like he has changed his old channel’s name to his original name. His most recent video was uploaded on August 5, 2021, which has the title “Relationship Expert Says We Are Dating?”. In three days, the video has been viewed by more than 202K people.

Aaron Burriss currently stands at a height of 5 feet 8 inches or 1.76 m tall and weighs around 65 kg or 143 pounds. His body stats like chest size, arms size, and waist size are not available at the moment. Likewise, his hair color and eye color are both black.

Aaron Burriss is believed to be single at present time. However, it doesn’t mean that he has not dated anyone in the past. He has dated a fellow YouTuber, Kimmy Dufresne. Both used to make videos together. They were dating around in 2013, and they split out after three years in April 2016.

After breaking up with Kimmy, he started dating Sarah Wolfgang. Though, it didn’t last for long. Aaron was also rumored to be dating an actress, Veronica Merrell. However, the pair never confirmed their relationship openly in public. Aaron and Veronica consider themselves as each other’s best friends. Their fans have even given them a ship name “RonRon”.

As of 2022, Aaron Burriss’s personal wealth is estimated to be around $2 million. He has been able to gather such a big amount from making videos on YouTube. Aaron’s estimated annual revenue from YouTube is around $66,000. His self-titled YouTube is currently followed by over 1.48 million people and has over 230 million views.

RSS Error: A feed could not be found at `https://news.google.com/topics/CAAqKAgKIiJDQkFTRXdvTkwyY3ZNVEZtTUhrNFpqQXpZaElDWlc0b0FBUAE?ceid=US:en&oc=3`; the status code is `200` and content-type is `text/html; charset=utf-8`
Related Topics:
Up Next

Bentellect Net Worth: How Rich is the TikTok Star Actually?