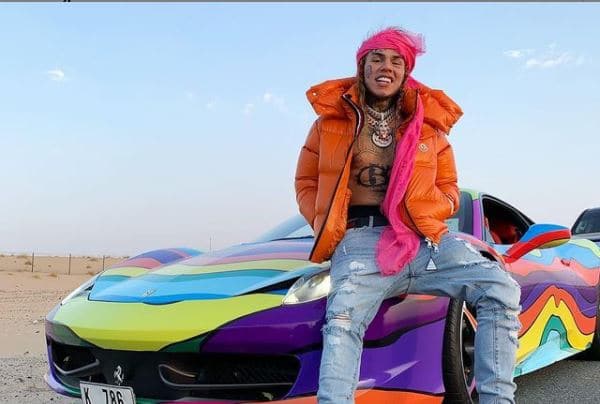 Daniel Hernandez, better known as Tekashi69 or 6ix9ine is a 26 years old American rapper and songwriter. He is best known for his song “Gummo”, which became a sleeper hit. 69x9ine is also known for his songs “Keke”, “Kooda”, and “Gotti”. As of 2022, 6ix9ine net worth is estimated to be roughly $10 million.

6ix9ine was born Daniel Hernandez on the 8th of May, 1996 in Bushwick, Brooklyn, New York City. He was born to Puerto Rican father, Daniel Hernandez, and a Mexican mother. Natividad Perez-Hernandez. His mother came to the United States in 1988 in a search of better life and opportunity. Though she had to struggle by working as a house cleaner, and factory worker.

Hernandez was earlier more actively involved in playing soccer. At just 13 years of age, he made his place secured at the major league soccer team. Though, he could not join the league team due to his mother who had trust issues with a person getting him into the league soccer team. He has an elder brother named Oscar Osiris Hernandez.

Regarding his education detail, he has studied at the elementary school, Public School 59. Then, he joined Juan Morel Campos Secondary School for the middle level.  For high school, he joined Legacy High School.

However, he didn’t complete his high school education. Hernandez was also expelled in 8th grade due to his bad behavior. At that time, he actually went through post-traumatic stress disorder after the death of his step-father.

Start of His Career

After leaving high school, he started working as a delivery boy at a grocery store. Hernandez was struggling financially and in a hope that he could give his mother financial support, he took low-income jobs rather than continuing his study.

He had an interest in singing from the beginning. He has also sung in a church during mass. Hernandez decided that he would rap after meeting New York record label Hikari-Ultra’s CEO Peter “Righteous P” Rodgers.

6ix9ine Net Worth & Rise to Fame

In 2014, he started releasing his rap songs. He dropped his first song titled “69” in August 2014, and then he dropped another song titled “Pimpin” in September 2014. After a month, he released two songs “4769” and “Who The Fuck is You”. His aggressive rapping style and using anime for his music video were gaining him a lot of attention.

Hernandez claimed prominence in July 2017 after his Instagram post went viral on Twitter and Redditt. On November 10, 2017, he came up with a song titled “Gummo”, which became a commercial hit. The song also got a peek at the 12th spot on the US Billboard Hot 100. He received further recognition after the release of another song titled “Kooda”.

On February 23, 2018, he released his first mixtape titled “Day69”. The mixtape became a huge hit which was peaked at the 4th spot on the Billboard 200 album chart. He fell into a controversy in May 2018 after he was found involved in a shooting of the fellow New York rapper, Casanova. That made him lose a $5 million headphone deal. He was also banned from Barclays Center. For few months, he didn’t release his new songs.

6ix9ine signed a two-album contract deal with the recording label, 10K Projects in October 2019. Out of the two albums, one album was made in English, and one album was in Spanish. On September 4, 2020, he released his second album titled “Tattles Tales”. Hernandez released the track titled “Zaza” on February 19, 2020. The track made a debut at Number 90 on the Hot 100.

You May Also Like:   G Herbo Net Worth: How Rich is the Rapper Actually in 2022?

6ix9ine would be appearing in the first episode as the explosive guest in the launch of Akademiks’ Off The Record podcast. Akademiks dropped the new teaser clip on July 29 where 6ix9ine and Wack 100 were seen discussing the Yaya rapper’s potential murder. The podcast is scheduled to be broadcast on August 3, 2021.

6ix9ine is currently dating a lady named Jade. His girlfriend’s real name is Rachel Watley whom he met just a few weeks before he was heading to prison in late 2018. When he was 18, he was in a relationship with Sara Molina. With her, he has a daughter named Saraiya Hernandez. Later, In 2018, he had another daughter named Briella Iris Hernandez with his then-girlfriend Marlayna M.

6ix9ine has been arrested multiple times in his life. He was arrested in 2015 for using a child in a sexual performance. Then, in 2018, he was arrested for choking someone at a mall in Houston. That same year, he got arrested on drugs, weapons,s and racketeering charges.

In late 2019, he was sentenced to 13 months for arranging a deal with the government prosecutors. Though he was scheduled to release from prison in August 2020, he was released earlier on April 2 due to the COVID-19 pandemic.

6ix9ine has amassed the total net worth amount of $10 million by 2022. He has been able to gather a huge amount through his big record deals with the record label companies 10K Projects and GlobalStreamNow.

DJ Akademiks Net Worth: How Rich is the Rapper Actually?