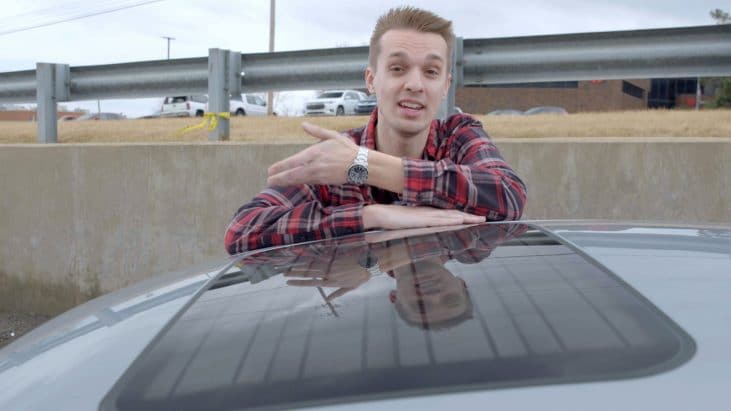 Tyler Hoover is a famous American automotive YouTuber, best recognized for his YouTube channel “Hoovies Garage”. He is popular for his interesting videos on the channel where he makes crazy purchases of cheap enthusiast cars and turned them into a new one. As of 2022, Tyler Hoover net worth is around $2 million.

Tyler Hoover was born in Wichita, Kansas, United States. He has spent his childhood days in Wichita. In 2005, he completed his graduation from Andover High School. Tyler later 2010 held a graduation degree from Wichita State University majoring in Political Science and Government.

While studying at Wichita State, he worked as a car salesman for a few automotive companies like Cadilac, Chevrolet, and BMW. Soon after completing graduation, he established his own car dealership named “Ad Astra Automotive”. Initially, the business was a success, but as it grew and after expanding the business, he started having more reconditioning costs. That made his business shut down in January 2015.

Tyler Hoover Net Worth and Career

After exiting the door of his business, he started working for FFC Midwest as opening coordinator and operations support. During the time he worked there, Tyler started his YouTube channel. Initially, he made a video sharing his passion related to cars. Surprisingly, the video started getting popular, which led him to end his job at FFC.

You May Also Like:   Karen Civil Net Worth: How Rich is Social Media Strategist Actually?

Tyler named his YouTube Channel ‘Hoovies Garage”, which he opened in 2016. To date, the channel has 1.21 million subscribers. Tyler’s videos are mainly based on a collection of cheap cars which he calls “The Hoopties Fleet”. He repairs the cheap cars spending some amount on maintenance and make them interesting as a new car. He presents all processes from sourcing, buying, and repairing in his videos.

Tyler generates a good amount from selling his transformed cars. However, he also suffers loss sometimes because of maintenance costs. In 2017, he spent over $50,000 amount just on mechanics for fixing his cars. That determines his passion for the car, who doesn’t stop working on his passion even he suffers some loss.

Hoover has a lot of popular videos on his channel, which earned him a million views. One of his most viewed videos came on repairing process video on a broken Mercedes S600 V12. He bought the Mercedes for just $4500. He spent an estimated amount of $13,000 on the repair of the car. The video went viral and earned him 5.4 million views.

His next most viewed video is on $15,000 luxurious Hyundai. He states in the video why the Hyundai is more luxurious than Rolls Royce. By now, the video has generated 4.9 million videos. Besides repairing videos, Tyler also shares a review video of cars showing the pros and cons of respective cars.

Tyler Hoover currently stands at a height of 5 feet 11 inches or 180 cm tall and weighs 75 kg or 165 pounds. His chest size, waist size, and hips size are 41, 29, 24 inches respectively. Meanwhile, his hair color and eye color are both light brown.

Tyler Hoover is married to Quynh Anh. He had an interesting love story. Tyler met Anh for the first time at a Wichita-based Asian buffet restaurant, where she used to work as a waitress. Their love story is reported to begin from there. His wife Anh is generally from Vietnam.

They were not married until 2019, though their daughter was born in 2011. Sources revealed that Anh didn’t marry him because of his huge net worth figure. However, Tyler tied the knot with Anh in 2019. After marriage, they had a son.

Tyler Hoover has collected, repaired, and sold more than 100 cars to date.  Right now, he owns around 17 cars which are in his garage. Among them, he has many Mercedes, a 1951 Ford Country Squire, and a 1966 Ford  Mustang. At the start of 2022, Tyler Hoover has accumulated a total net worth value of $2 million. Most of his earnings have come from his YouTube channel and repair work.

CookieSwirlC Net Worth: How Rich is the YouTuber Actually?