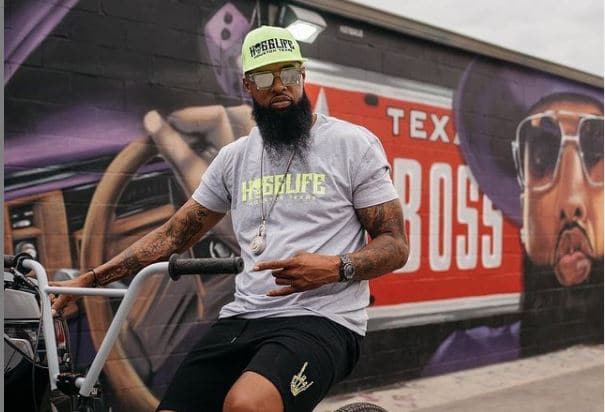 Stayve Jerome Thomas, better known as Slim Thug is an American rapper. He is best known for his contribution to the rapper, Mike Jones’ 2004 hit single “Still Trippin’”. As of 2022, Slim Thug net worth is estimated to be around $3 million.

Slim Thug was born Stayve Jerome Thomas on 8th September 1980 in Houston, Texas, United States. He has not revealed any information about his parents, and academic background. He was given the nickname of Slim Thug for being tall and lanky. Slim was in a love with music since his childhood days. He used to perform freestyle raps at 17 years of age at local high school parties.

Slim started off his rap career singing with the Southern rap record label, Swishahouse. It was in the 1990s when he used to perform for the record label. Soon, Slim realized that he could make more money distributing his own mixtapes. Then, he separated with Swishahouse on good terms, and started his own independent record label named “Boss Hogg Outlawz”. Likewise, he bought two record stores, and at the same time, he worked in real estate.

Slim released his first studio album titled “Already Platinum” in July 2005. However, it took some time for him to release his debut album as it got delayed. The album was released under the record label Star Trak Entertainment and Interscope Records. His hard work pays off when the album peaked its spot at 2nd place on the Billboard 200 albums chart. Likewise, the album was sold for 130,000 copies in its 1st week.

Slim received wide recognition after he made an appearance on the rapper, Mike Jones’s song “Still Tippin’. The song became a big hit which has 11 million YouTube views to date. Likewise, he garnered immense popularity after featuring on Beyonce Knowles’s song “Check on It’, and Gwen Stefani’s song “Luxurious”.

Slim separated with the record label, Star Trek & Interscope Records in 2008 after releasing 3 albums titled “Boyz N Blue”, “Serve & Collect”, and “Back by Blockular Demand: Serve & Collect II”. In 2009, he released his second solo album titled “Boss of All Bosses”. The album didn’t receive an overwhelming response as his first album. However, it was successful to make a place at #15 on the Billboard 200. The album sold 32,000 copies in its first week.

Slim released his third studio album titled “Tha Thug Show” on November 23, 2010. His first song from the album was Gangsta featuring rapper Z-Ro. Likewise, his second song titled So High featured the rapper, B.o. B. In 2013, he came up with a new EP titled “Welcome to Texas EP”, which featured the guest appearances from the music artists Rick Ross, Ludacris, and Pimp C. Slim’s recent album titled “Thug Life” was released on March 17, 2020, which includes 10 songs.

Slim was tested COVID positive in 2020, which he revealed through a video on Instagram. Through the video, Slim revealed that he had a fever and cough, so he went for a test, and later, the report showed him a COVID positive. A few years back, MTV News revealed that Lupe Fiasco’s video “Hip Hop Saved My Life” was based on his life story. Later, Fiasco also confirmed the news.

As of 2022, Slim Thug’s net worth is estimated to be around $3 million. He has earned a vast chunk of money from his music career. Slim is also earning a handsome figure from his self-titled YouTube account, where he has 289K subscribers and over 136 million views.